Combating Hate Crimes in Every State

The tragic murder of African Americans engaged in Bible study in Charleston, SC, on June 17 has highlighted the unfortunate fact that bias-motivated violence in our nation is still a sad reality.

For more than three decades, ADL has spearheaded the drafting, enactment and implementation of hate crime laws, working in partnership with other civil rights and religious organizations, law enforcement groups, civic agencies and business leaders. Today, the federal government and 45 states and the District of Columbia have their own hate crime laws. We have had considerable success, but we need to do more. 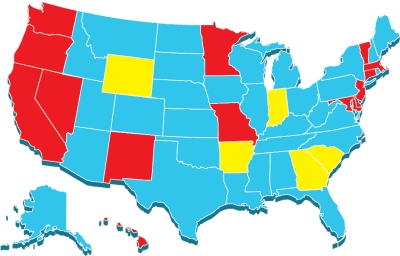 Why do we need to do more?

What Are The Goals?

What is “50 States Against Hate” (#50StatesAgainstHate)?

What are hate crimes?

Hate crimes are crimes in which a perpetrator targets an individual or institution because of race, religion, ethnicity, national origin, gender, sexual orientation, gender identity or disability. A hate crime such as a bias-motivated assault typically carries a stiffer penalty than an assault without the bias component.

How are hate crimes different from other crimes?

Hate crimes have an impact that lingers, and extends beyond the specific victim. They make members of minority communities fearful, angry and suspicious, and raise tensions that can divide and polarize neighborhoods, towns and cities.

Why is 50 States Against Hate necessary?

One hate crime is committed in this country every 90 minutes.

What states currently do not have hate crime laws?

How many states need more inclusive and comprehensive laws?

As of August 2015, only 32 states have hate crime laws that include sexual orientation, only 31 include disability, only 29 include gender, and only 11 include gender identity. A map providing information about specific states is available on this page.

What other recommendations are included in the 50 States Against Hate initiative?

Other recommendations include enhanced training for law enforcement officers on how to identify and respond to hate crimes, better data collection and reporting by law enforcement agencies, and increased public education, all of which would improve the current situation.

Which organizations are partnering with ADL in the 50 States Against Hate initiative?

Many organizations have already signed on, and the number is growing rapidly. The national coalition partners include: