American Attitudes toward Extremist Threats: A Survey Following the Events at the U.S. Capitol 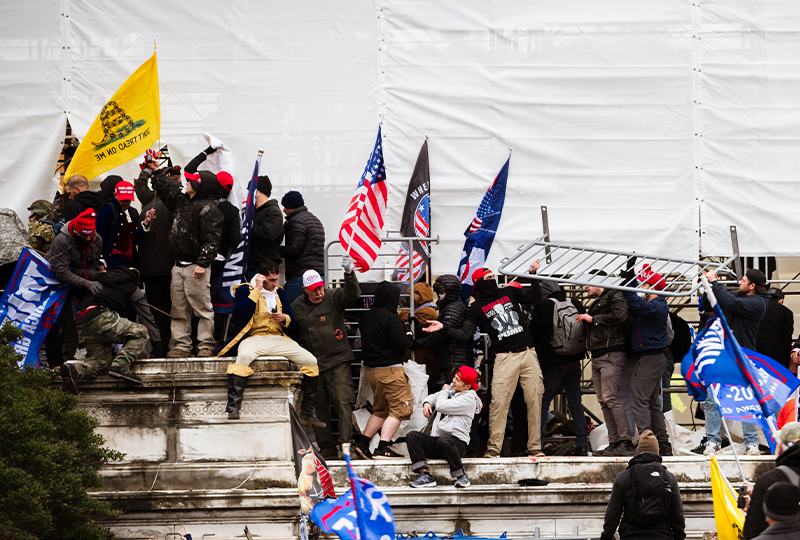 Three-Quarters of Americans Are Concerned About Violent Domestic Extremism

On Wednesday, January 6th, a violent mob stormed the U.S. Capitol and forced the Joint Session of Congress to suspend the certification of the 2020 election results. ADL launched a nationally representative survey of more than 1,100 U.S. adults in an effort to understand how Americans viewed Wednesday’s events and extremist threats faced by the country as a whole. 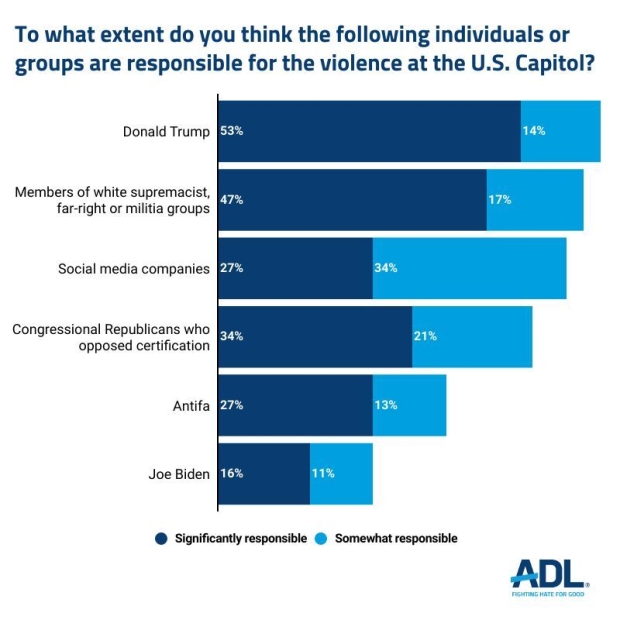 We asked the respondents who were aware of the events about which individuals and groups they believe were responsible for the day’s violence at the U.S. Capitol. Approximately two-thirds of these Americans believe Donald Trump (67%) and members of white supremacist, far-right or militia groups (such as the Proud Boys and Oath Keepers) are each at least somewhat responsible for the violence at the Capitol. Over half of these Americans also believe that social media companies like Facebook and Twitter (61%) and Congressional Republicans who said they would oppose certification of election results (55%) are at least somewhat responsible.

Surprisingly, twenty-seven percent of Americans believe that antifa is significantly responsible for the attack on the U.S. Capitol. While ADL has expressed concerns about violent encounters between antifa and the far right previously, there is no evidence to support this claim.  A January 8 report from the FBI definitively determined that far-right extremists organized and perpetrated the insurrection.  This claim has been also disproved through the use of facial recognition technology, as well the social media posts of the pro-Trump rioters themselves, who posted selfies from inside the Capitol.

It’s worth noting that disinformation efforts to blame antifa began before January 6, including accusations that antifa planned to infiltrate the ranks of the attendees, allegations that antifa planned to intercept “Patriot” convoys heading to D.C. or attack attendees at Metro stations. The rising anti-police sentiment on the far right was also evident in the form of conspiracies alleging that police would be "escorting" antifa into D.C. Members of the far-right Proud Boys attempted to capitalize on this disinformation campaign, telling followers they planned to “disguise” themselves as antifa for the January 6 event. 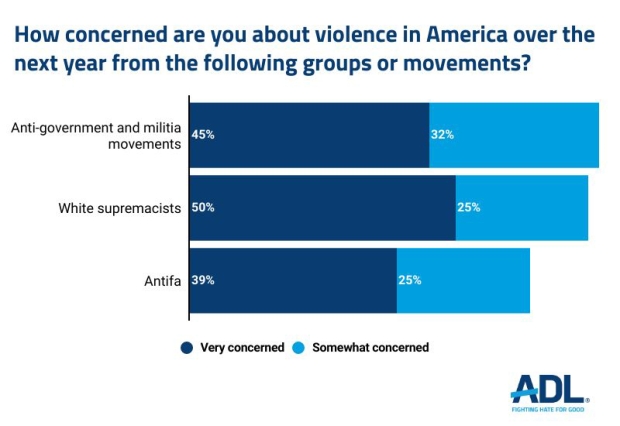 These results are concerning because they point to successful disinformation efforts: the evidence amassed by U.S. government sources and organizations such as ADL shows unequivocally that far-right groups are responsible for far more terrorist plots and successful attacks in the United States than any other extremist population. Furthermore, far-right extremists were responsible for 90 percent of all extremist-related murders in the United States in 2019, and 76 percent of extremist-related murders in the last ten years. Virtually all of those murders in 2019 (81 percent) were at the hands of white supremacists.

Both before and since the violence at the U.S. Capitol, many have pointed to the role of social media companies like Twitter, Facebook and YouTube in increasing radicalization and the dissemination of hate. We have previously conducted surveys showing significant American support for greater action by social media companies in this area. These respondents felt the same: 63% strongly or somewhat agreed that social media companies should ban posts and individuals encouraging or celebrating extremism and conspiracy theories.

The survey of 1,176 U.S. adults (1,102 of whom were aware of the incident in the capitol) was conducted by YouGov, a leading public opinion and data analytics firm, on behalf of ADL. The surveys were conducted online from January 7-8, 2020. The figures have been weighted and are representative of all U.S. adults aged 18 or over. YouGov surveys are taken independently online by a prescreened set of panelists representing many demographic categories. Panelists are weighted for statistical relevance to national demographics. Participants are rewarded for general participation in YouGov surveys but were not directly rewarded by ADL for their participation in this survey. The margin of sampling error for the sample of respondents aware of the capitol incident is plus or minus 2.95 percentage points.