A View from Southern Israel 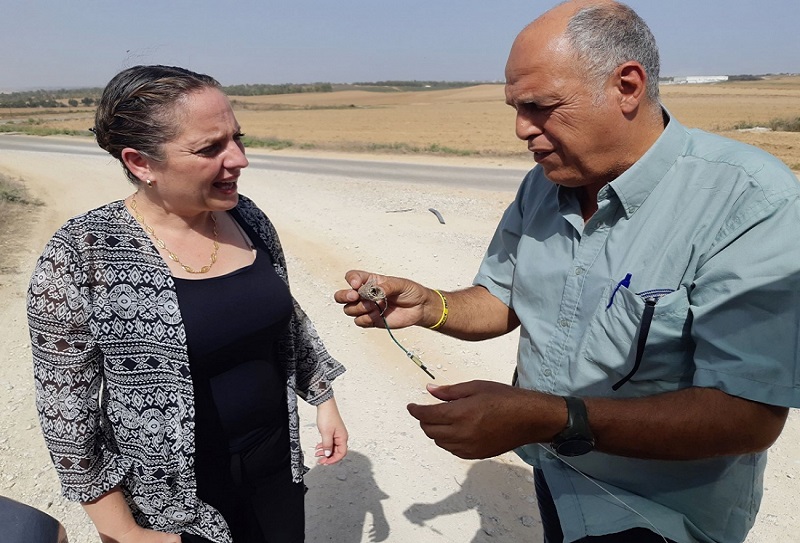 One morning, my colleague Gaby Dubois and I set out to visit Israel’s south, near the border with Gaza, in the wake of tensions there in recent months. Just a few days earlier it seemed as if the escalating security situation would force us to cancel our visit, but thankfully things had quieted down a bit by then to enable us to go.

We went to visit the Sdot Negev Regional Council for two reasons: first, to express ADL’s support and solidarity with the residents of the region enduring the onslaught of rockets, explosive kites and fire balloons for too long. Second, to get a closer look at the situation, hear from the Head of the Regional Council Tamir Idan, and to tour the vicinity of the Gaza border together with the council’s chief security officer Rafi Babian.

To be sure, the situation in Gaza itself is complicated, and there is a real humanitarian and societal crisis. And when those tensions are directed at Israel, it is these communities that bear the brunt.

There is something very powerful about the dissonance that you feel when you reach these areas – on the one hand, the pastoral scenery and the serene and welcoming local residents, and on the other, the knowledge that at any moment, the calm could be violated – a siren could go off warning of an incoming rocket or an incendiary balloon or kite could fly in and ignite an entire area; or sniper fire.

Some background: The Sdot Negev Regional Council is located in the northern Negev and has a population of more than 10,000 people across 12 communities. It is important to understand that not all of the communities within the boundaries of the council are defined as “Gaza border-zone communities,” which, in accordance with a government decision, includes all the localities situated seven kilometers or less from the Gaza border.

Tamir Idan shared with us the challenges the council faces in the region. “The daily pursuit of security matters is very important,” said Idan, “but under normal circumstances, it is not something that a local authority should have to deal with. Normally, its main concerns are education, culture and infrastructures.”

Indeed, security concerns impact every single resident of the area and all aspects of life. But in addition to protecting classrooms and securing the settlements, which take up a considerable part of the council’s work, educating residents about the need to be within a 15-second proximity to a protected space is an important aspect of planning everything they do.

Idan explained that despite the ongoing violence in the area, especially during Israel’s 2014 war with Hamas in Gaza, the region has actually seen a demographic growth spurt.

Following our meeting at the council offices, we set out on a tour of the area. Rafi, a longtime and energetic security officer, knows every inch of the area. On the way to the Gaza border, we passed the fields, black with soot from the fires that have raged in the area in wake of the incendiary balloons whose remnants lie scattered all around. The damage to the fields in the area is extensive, but the damage to the animals and wildlife is even greater. Entire populations of turtles, snakes and other animals have been burned and destroyed, leaving the area with a different ecological balance. Rafi notes that “now the fields are black, but in the fall we hope they will once again become green and in the winter turn red from the wildflowers”.

When we visited a kindergarten where a fire balloon landed and heard from Rafi about the events of last week, we were amazed by the kindergarten teacher’s resourcefulness, a recurring motif in the daily lives of the residents of the border zone.  And in a demonstration of the resilience of this community, the day after incident, the children still came to school.

Rafi keeps the remnants of the enflamed kites flown from the Gaza Strip in his SUV. It is hard to believe that this innocent toy has been weaponized to set fields ablaze, cause human and ecological damage, with the potential to cause much more serious harm. But we were horrified to see that the kite’s tails were made of pages from the notebooks belonging to Gaza schoolchildren, pieces of cut-up pages filled with the small, dense script of questions from a notebook. We could not help thinking about how a school notebook, a symbol of education and the future, was transformed into a kite aimed at sowing death and destruction.

We heard many stories from Rafi, but one of them really resonated. He told us of an old friend from the Gaza Strip who had worked for many years in Rafi’s kibbutz, with whom he speaks quite often. The Palestinian friend lost his wife and is himself unwell. His friend has one wish: to cross the border and go to Rafi’s kibbutz, to meet with him in the dining room and talk over a cup of coffee, as they used to in the past. A simple story about hope, friendship and empathy, of good people from both sides of the border who want nothing more than a better future.

Rafi also told us about a friend of his whose son was killed by Hamas. Since his son’s death, he has been focused on one thing: bringing Palestinian children from the Gaza Strip to Israel for medical treatment. Rafi said: “When you tell him that perhaps the father of that child was responsible for the death of his son, he responds: ‘And if so, why is that the child’s fault?’”

And that was when we understood: the resilience of those living in these southern communities lies in the fact that every day they must confront their own mortality and yet remain unrelentingly optimistic.

As the saying goes: We came to strengthen others and left feeling strengthened by them.