ADL Event on Interreligious Tolerance and the UAE 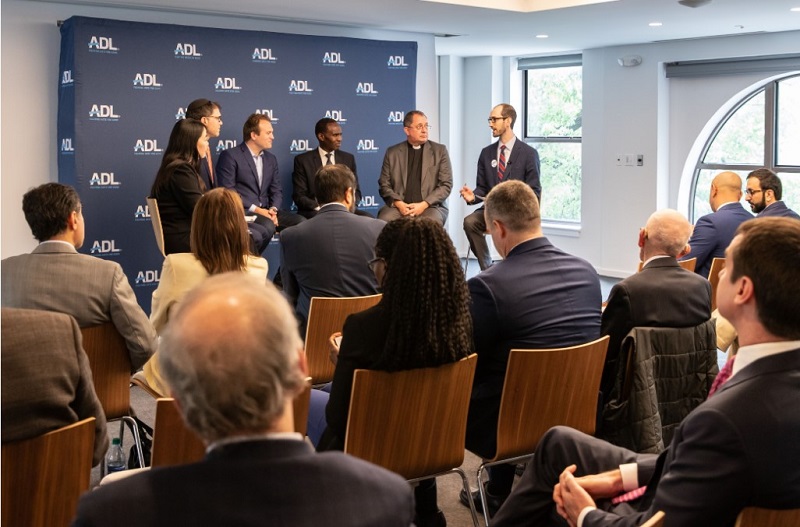 ADL co-hosted an important discussion on interfaith relations, combating bigotry, and celebrating tolerance with the Embassy of the United Arab Emirates on May 14th in Washington, DC.  The packed room included roughly fifty guests, including the longtime UAE Ambassador to the United States Yousef Al Otaiba.  I had the privilege of moderating, and ADL’s Vice President for Government Relations, Advocacy, and Community Engagement Erika Moritsugu spoke on the panel, alongside a range of interfaith leaders who are doing trailblazing work in the region.

The big “news” at the event was our announcement that the Jewish community in the Emirates has been developing so well that one of the panelists, Rabbi Yehuda Sarna of NYU, was just selected by the community to be the community’s very first chief rabbi.  That news made headlines in a variety of outlets, including the Jewish Telegraphic Agency, Religion News Service, Jewish News Syndicate, Times of  Israel, Ha’aretz, NY Jewish Week, the NJ Jewish Standard, the Algemeiner, and Israel National News, in addition to numerous Arabic outlets that picked up coverage by BBC Arabic.

Of course, ADL does not provide a blanket endorsement for any national government, and at times its positions may differ from those of the UAE’s on a number of different issues, including some cases that have involved anti-Semitism.  We are also publicly on record raising concern about the humanitarian impact of the ongoing war in Yemen.

And yet it is also important to recognize that Abu Dhabi has taken significant, constructive steps to advance the theological basis for Muslim coexistence with adherents of other religions, including but not limited to Christians and Jews.

For example, the UAE has trained thousands of Afghan imams on interreligious coexistence and appointed the world’s very first cabinet-level Minister of Tolerance, whose mission focuses considerably on interfaith outreach.  Abu Dhabi has declared 2019 a “Year of Tolerance,” with extensive programming to elaborate on the topic.

Beyond Rabbi Sarna’s new role, the audience at our event also learned about the important work of several other faith leaders who have personally helped advance interreligious tolerance with the support of the UAE government. The work of these religious leaders provides some encouragement that this is one issue area where there are positive trends supported by an Arab government in the Middle East on issues that are central to ADL’s mission.

In addition to Rabbi Sarna, the panel also featured:

The event also welcomed a special guest, Dr. Sultan al-Remeithi, who was visiting Washington on his first official visit since becoming Secretary General of the Muslim Council of Elders.  This Abu Dhabi-based Council may be the most significant moderate preacher’s union in the Muslim world, and it has served as a crucial counterweight in recent years to the hardline International Union of Muslim Scholars, whose intolerant founder Yusuf al-Qaradawi has advocated both terrorism and genocide against the Jewish people.

The audience also heard from Mr. Jay Kansara, Director of Government Relations for the Hindu American Foundation, who highlighted the significance of Abu Dhabi helping to build the first Hindu mandir stone temple anywhere in the Middle East.

These individuals spoke firsthand to some of the ways in which Abu Dhabi has been taking constructive steps for the sake of interfaith coexistence, celebrating tolerance, and combating religious bigotry – including in some regards that are genuinely helpful to the Jewish community.  We may not be aligned on every issue, but we will continue to encourage progress and to note positive or negative developments that pertain to ADL’s core mission when we see them.