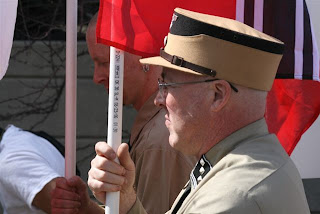 Nobody can squeeze fifteen minutes of infamy out of the Internet like a neo-Nazi group can, a fact demonstrated recently by a flare-up in the blogosphere after South Carolina neo-Nazi John Taylor Bowles registered as a Congressional lobbyist on behalf of the tiny American Nazi Party (ANP).

Within a few days of the April 10 filing, Bowles’ name appeared in dozens of newspaper articles and thousands of blogs as the “first ever” Nazi lobbyist. That it was merely a publicity stunt seemed to have occurred to relatively few observers. However, the ANP is miniscule even by neo-Nazi standards, with only around two dozen active members. Led by Rocky Suhayda of Michigan, the ANP holds few events and does little more than publish a crude newsletter.

The lobbyist stunt might have been out of character for Suhayda, but was typical of Bowles, who has frequently sought the spotlight over the past decade. Bowles is a long-time neo-Nazi who first became involved with the National Socialist White People’s Party as a teenager in Baltimore in the 1970s. In the 1980s he reportedly spent four years in prison on an arson conviction, something that didn’t prevent him from subsequently working for the U.S. Department of Agriculture as a meat inspector.

Bowles eventually returned to neo-Nazism by joining the National Socialist Movement in 2003 and becoming one of its more active members. By 2005, Bowles was the group’s Virginia state leader; he subsequently became state leader for South Carolina. It was there he orchestrated his first major publicity stunt, issuing a press release in December 2006 announcing that he was running for president.

Over the next year and a half he used this position as “presidential candidate” to help him get attention from both within the white supremacist movement as well as from the media—even though his name was not on any ballots and Bowles himself was ineligible to run (by virtue of his conviction). During this time, Bowles also exploited anti-immigration sentiment for publicity by organizing an anti-immigration rally in South Carolina and announcing a trip to the Texas-Mexico border he dubbed “Operation Throw Back the Wetback.”

Bowles’ exploits did garner him publicity, but also the negative attention and jealousy of fellow NSM members, who kicked him out of the group in late 2007. In response, Bowles formed his own splinter group, the National Socialist Organization of America, which never had more than a handful of members and fell apart about eight months later, after Bowles suffered a heart attack.

After recovering, Bowles joined his fourth neo-Nazi group, the American Nazi Party, in 2009, writing for its newsletter, the White Worker, and organizing events in South Carolina. His lobbyist stunt seems to have been an attempt to regain the “glory” of his faux presidential bid—the only lobbying issue he even put on his registration form was “ballot access laws.”

One Year After Ban, Holocaust Denial Remains on Facebook

The Social Pattern Library shows developers and designers how to build platform features that can be used to prevent users from disseminating hateful content.
Cyberhate
Children's Literature