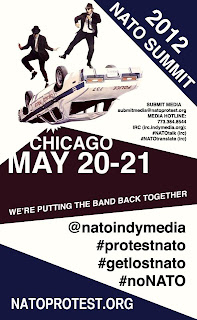 Five individuals have been arrested by Chicago police in three separate bomb-related cases during the lead-up to the recent NATO Summit.

Three men were arrested in a raid last Wednesday in connection to an alleged plot to attack President Obama’s campaign headquarters and Chicago Mayor Rahm Emanuel’s home, as well as police and financial institutions. The men were in possession of Molotov cocktails and instructions for making pipe bombs, according to court documents.

The suspects, who have been identified as Brian Church, 22 from Florida, Jared Chase, 27 from New Hampshire, and Brent Betterly, 24 from Massachusetts, are all self-described anarchists. The three traveled to Chicago together from Florida, where they were reportedly involved with the Occupy Movement.

Last month, five self-described anarchists with ties to the Occupy Movement were arrested in Ohio after allegedly attempting to blow up a Cleveland-area bridge “to send a message to corporations and the United States government.”

Sebastian Senakiewicz, a 24-year-old self-described anarchist, was also arrested in Chicago for making a false terroristic threat. Prosecutors said Senakiewicz was unsatisfied with the relative-calm leading up to the NATO Summit and allegedly bragged he could blow up a downtown bridge. He reportedly claimed he had access to a vehicle packed with explosives and weapons.

In fifth man, Mark Neiweem, 28, was charged with attempted possession of explosives. While charging documents do not mention targets or his motives, the charges assert that he asked other protesters for materials to construct a pipe bomb.

Neiweem is reportedly a member of the Anarchist Black Cross (ABC) and frequented their online chat rooms. ABC is a national collective that aims to support and defend political prisoners and has indicated support for class war (abolishing capitalism). Some ABC “collectives” merged into a federation advocating armed self-defense through its Tactical Defense Caucus, which it hoped would organize, recruit and train anarchists in the tactical use of firearms. In his testimony before the Senate Committee on Intelligence in February of 2005, Robert Mueller, Director of the FBI, identified the federation as a potential threat to national security.

Other anarchists clashed with police at the end of an otherwise peaceful anti-war protest Sunday, leading to dozens more arrests.

Letter to Sec of State Pompeo on Hezbollah IRFA Designation