Pay much attention to the billboards you see on the highway? Well, some anti-Israel groups in the United States are betting you do and paying to advertise their message on prominent billboards.

Last week, three anti-Israel organizations  – If American Knew, Deir Yassin Remembered and Jewish Witnesses for Peace and Friends – responded to a pro-Israel billboard in Detroit by securing billboard space of their own with the message, “$8 million/ Day to Israel? Our money is needed in America!” Another billboard that recently appeared in Denver read, “Tell Congress: Spend Our Money at Home Not on the Israeli Military.” The Denver billboard was paid for by the Coalition to Stop $30 Billion, a New Mexico-based group that first displayed a similar message on a billboard in Albuquerque in 2009. 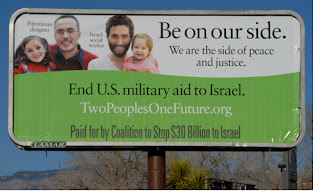 In addition to these new billboards, anti-Israel signs and advertisements have regularly appeared  on buses and subways in large metropolitan areas since 2010, including New York City, Washington, D.C., San Francisco and Chicago. The ads, which call for an “End [to] U.S. military aid to Israel,” were organized by a coalition of national anti-Israel organizations operating under the umbrella of a campaign called “Be On Our Side.”

It seems likely that the activists paying for and placing these ads are newly optimistic that their message will resonate in light of the fragile state of the U.S. economy and the national debt. The Coalition to Stop $30 Billion, for example, explains: “All this money is flowing away while America is suffering the worst financial collapse since the Great Depression.”
Previous Blog
Los Angeles Community…
Next Blog
White Supremacist Arrested…

There are many sects which refer to themselves with variations of the name Black Hebrew Israelites. Some, but not all, are outspoken anti-Semites and racists.
Anti-Semitism in the US
Extremism, Terrorism & Bigotry
Blog

Anti-Israel Activity & BDS
Anti-Semitism in the US
Hate Crimes