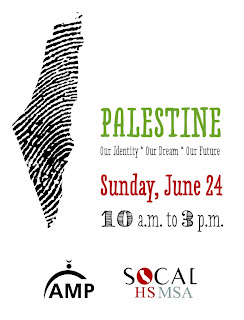 The conference is scheduled to take place on June 24 at the University of California, Irvine, a center for virulently anti-Israel campus activity in recent years. It is part of AMP’s 7th annual campaign to commemorate the “Nakba,” an Arabic term that means “catastrophe” and is used by Palestinians and their supporters to describe Israel’s Declaration of Independence.

AMP organizers say the conference is designed to help “train high school, college, and non-student activists on issues pertinent to Palestine activism.” The list of speakers invited to “educate” students on the Israeli-Palestinian conflict include several anti-Israel activists known for their use of rhetoric to delegitimize Israel.

Speakers include Ali Abunimah, co-founder of the anti-Israel Electronic Intifada blog; Taher Herzallah, AMP’s National Campus Coordinator and one of the 11 students arrested for shouting down Israeli Ambassador Michael Oren during a 2010 speech at UC Irvine; and Osama Abu Irshaid, an AMP board member who has previously expressed support for Hezbollah and conspiratorially alleged that the U.S. government makes decisions based on the “influential Jewish community.”

AMP targeted high school students earlier this year when it held its first high school training session in Villa Park, Illinois. The workshop was similarly organized to the upcoming conference at UC Irvine and included workshops on subjects such as the Islamic significance of Palestine, activism, and how to utilize the media.

This year’s AMP Nakba campaign consists primarily of educational and training sessions designed to “raise awareness about the occupation” and to “help bring justice and liberty to the Holy Land.” These events will be held throughout the month of June across the Southern California region, which include the cities of Hawthorne, Corona-Narco, Anaheim, Temecula, and Lomita.

AMP has increasingly made an effort to engage in facilitating student activism on college campuses and high schools nationwide. The importance of encouraging AMP’s presence among students was the central theme of the organization’s 2011 national conference, where a number of sessions were dedicated to how students can discuss the issue of Palestine in schools and on campuses. AMP’s concerted effort to engage with students has led to increased collaboration with on campus anti-Israel groups, such as Students for Justice in Palestine (SJP).

Background on the IHRA Working Definition of Antisemitism and how it can best be utilized.
Anti-Israel Activity & BDS
Antisemitism Globally
Antisemitism in the US
Blog

Extremist-related Shootouts with Police Soar in 2020

Learn the difference between implicit and explicit bias. Then, explore and reflect on examples of everyday bias you have seen in the news and in your life. (Student Resource)
Anti-Bias Education