As images of the insurrection at the U.S. Capitol have been shared across social media, activists in the broader anti-Israel movement used photos that showed the appearance of an incongruous Israeli flag among pro-Trump protestors at the rally and outside the Capitol to falsely link Zionism and Israel with the extremism of January 6.

According to photos and reports, other national flags hoisted by attendees included those of Canada, Cuba, Georgia, India, South Korea, and the former state of South Vietnam, a fact these activists did not mention.

Across social media, some asserted that Zionism and the state of Israel share characteristics with some of the worst extremist ideologies that were present, such as white supremacy, fascism and apartheid, despite the fact that many of the rioters were promoting antisemitic messages and ideologies.

Notably, prominent groups in the anti-Israel movement, such as Jewish Voice for Peace and National Students for Justice in Palestine, amplified such messaging: both retweeted Adalah Justice Project’s allegation that “the forces in the US who seek to maintain white supremacy are inspired by Israel's racism and vice versa.”

The following are some examples from recent days:

Commenting on photos of the Israeli flag, the Confederate flag and a rioter wearing a “Camp Auschwitz” hoody, Code Pink National Co-Director Ariel Gold tweeted: “On display yesterday. What do all these have in common?” [tweet]. 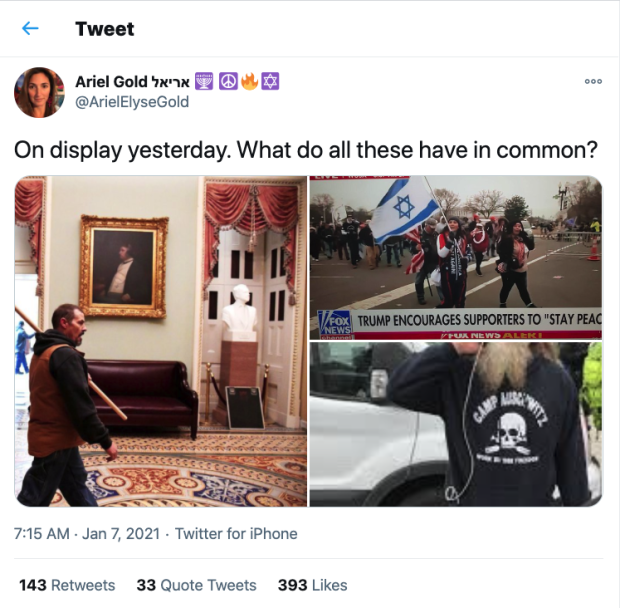 Adalah Justice Project: “Are we shocked to see Israeli flags flown by Trump supporters on the steps of the Capitol? As if we needed a reminder, the forces in the US who seek to maintain white supremacy are inspired by Israel's racism and vice versa.” [tweet]. This was retweeted by JVP and NSJP. 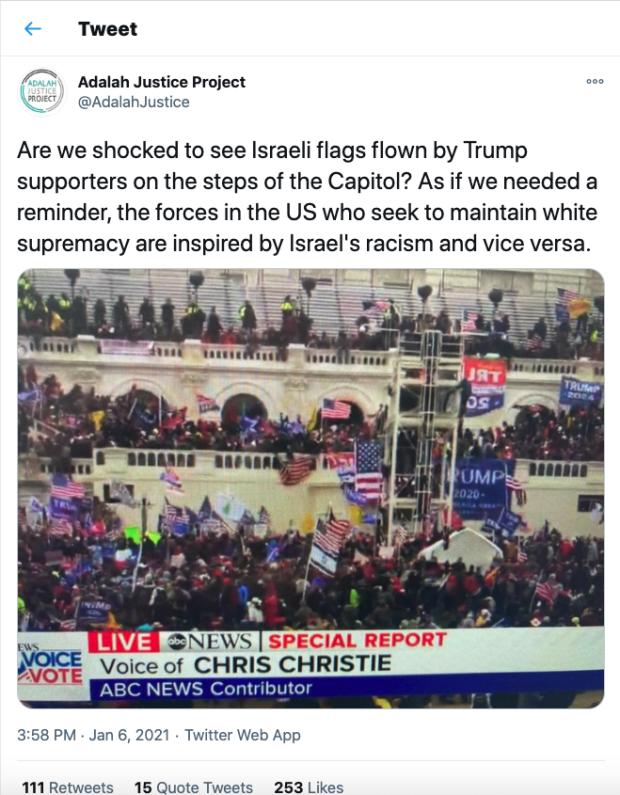 SJP UIC: “Israeli flags being displayed at the protests in DC two days ago. This shouldn’t be surprising, as far right ideologies all stem from the same form of racist hatred.” [tweet].

Palestina Hoy, a pro-Palestinian Spanish language Twitter account with more than 30,000 followers tweeted its take on the day’s events, which included images of the Israeli flag and the words: “Coup d’Etat in the USA. Zionism will be there, as always.” 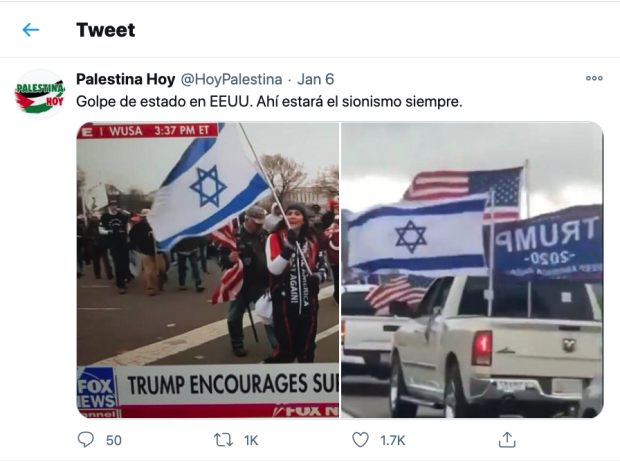 SJP UC Davis: “Nothing to see here, just your everyday "Israeli" flag appearance at the white supremacist-led overthrow of the US government.” [FB post].

Rabab Abdulhadi quote tweeted Jamal Dajani (who alleged that the Israeli flag was waved by pro-Trump protesters, and the Confederate flag was not – despite the clear images of a copious number of Confederate flags and images among those at the rally and on Capitol Hills) and used White Supremacy and Zionism hash tags in sequence, tweeting: “They still do fly confederate flag also #whiteprivilege #WhiteSupremacy #Zionism @TeachingPal @AmedStudies @SFSU4Palestine” [tweet]. 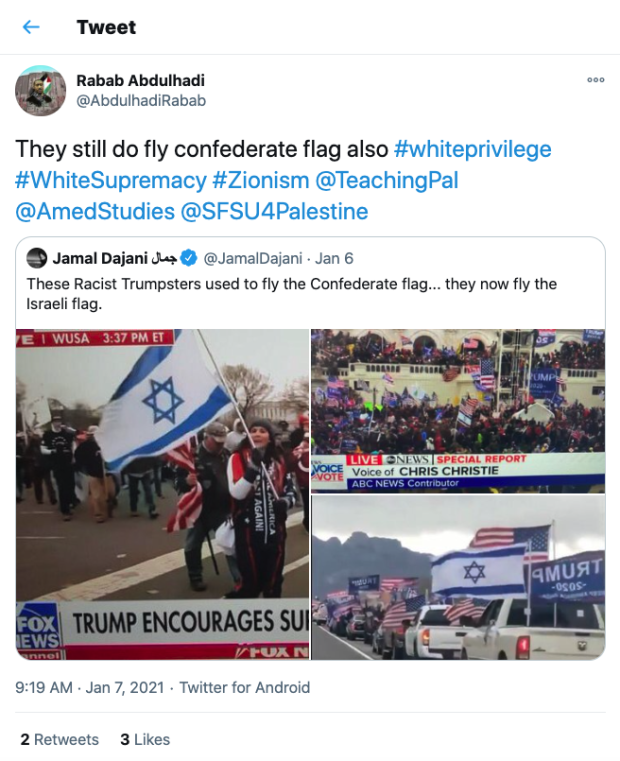 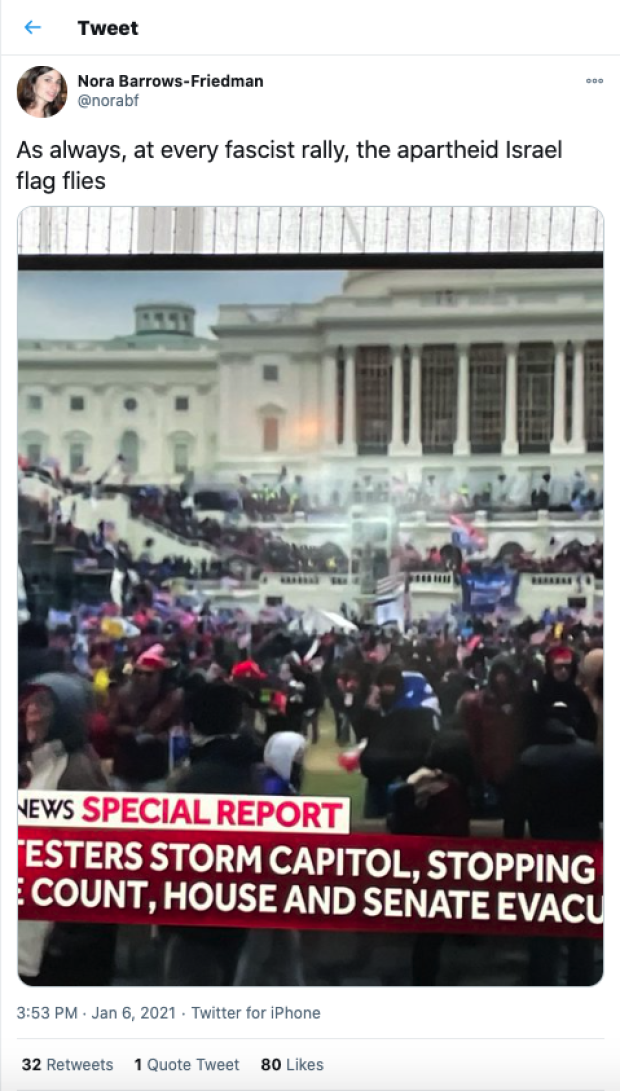 Palestine Legal quote tweeted a tweet reading: “It is not complicated. Just follow the lines of solidarity. One aligns with calls for justice, equality and freedom. The other has become associated with oppression, ethnonationalism and supremacy. Not just in the US, but all over the world.” [tweet]. 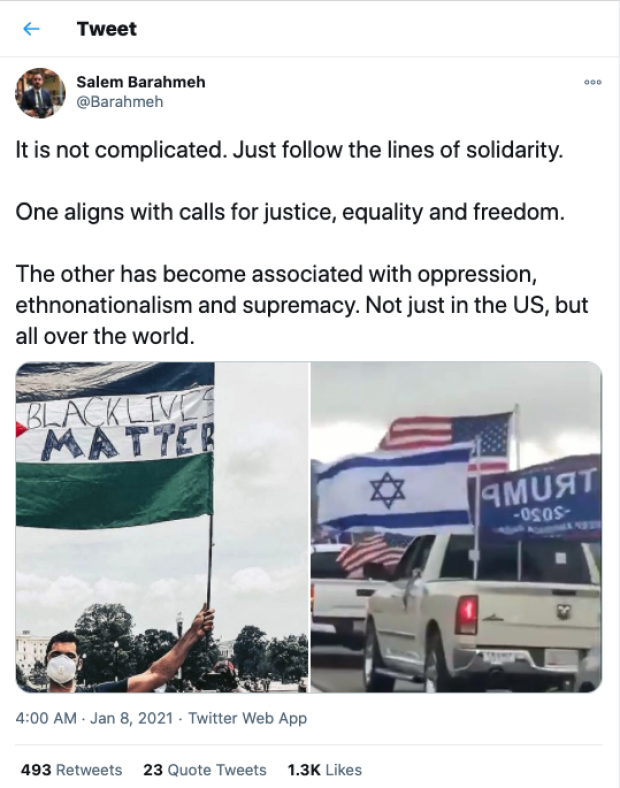