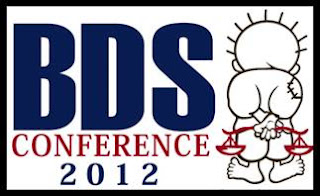 The Boycott, Divestment and Sanctions (BDS) conference held at the University of Pennsylvania last weekend featured speakers representing a wide range of strategies used to delegitimize Israel. As expected, many of the speakers promoted mistruths and biased narratives of the Israeli-Palestinian conflict and offered strategies on how to advance BDS initiatives and to further delegitimize Israel.

Several of the anti-Israel activists who headlined the Penn BDS conference are scheduled to next month’s One-State “Solution” Conference at Harvard, including Ali Abunimah, Dalit Baum and Sarah Schulman.
Below is a sampling of statements made at the Penn conference:

Both ADL and the FBI gather information about bias incidents that target Jews, but there are several differences between the methods.
Antisemitism in the US
Hate Crimes
Blog

Antisemitism in the US
Extremism
Terrorism
fact sheets

Eight Facts About Immigrants and Immigration

In an age of disinformation and bigotry, misconceptions about immigrants and anti-immigrant hate have spread throughout American politics and society.
Immigrant & Refugee Rights