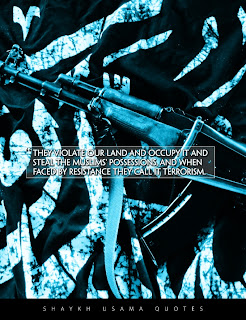 Al Qaeda in the Arabian Peninsula’s media arm released an English-language booklet in tribute to Osama Bin Laden today titled “In Remembrance of Usama.” The material, which consists of a collection of quotes from the former Al Qaeda leader, largely focuses on Jews and Israel and how they, along with America, are at war with Islam.

“The Crusaders and the Jews joined together and invaded the home of Islam,” reads one of the Bin Laden quotes. “’Greater Israel’ which includes inside its borders large parts of Iraq, Egypt, a pass through Syria, Lebanon, Jordan, the entire Palestine and large parts of the haramain [Saudi Arabia].”

Some of the quotes are taken from poetry Bin Laden wrote about the Palestinians in which he promised the liberation of Jerusalem and praised the “purest of blood” of Palestinian “martyrs.” He exhorts Muslims that “your brothers in Palestine are eagerly awaiting. They are awaiting that you annihilate America and Israel.”

Bin Laden is also quoted calling on young Muslims to join jihad and target Americans and Jews by saying that “killing them throughout the globe is one of the greatest duties and leading righteous acts to Allah.” A quote in which he describes Jews as “those who fabricated lies against the Creator” is cited elsewhere in the booklet.

The publication was prepared ahead of the one year anniversary of the raid on Bin laden’s compound by American forces in Abbottabad. The editors, apparently the same team currently producing the English-language terrorist magazine Inspire, translated several messages from Bin Laden as “an eye-opener for those who aren’t yet familiar with the mujahideen’s cause.” They also praised him as a martyr, writing that it was “what he wish for… for the last three decade [sic].”

AQAP’s focus on Palestinians and Israel is also prevalent in the two most recent issues of Inspire magazine, released earlier in the month. The magazine compares events in Syria to “the Jewish treatment of the Palestinians.” One of the ads attacks Israeli Prime Minister Benjamin Netanyahu, comparing him to Satan, and claiming that “they (the Jews) have the audacity to distort the word of Allah [parenthesis in the original].” Other messages in Inspire say, “Israel Can’t Hide” and call for attacks against Israeli targets as well as “Zionist and Zionist-friendly crusader media,” and “places where Jews are gathered, their leading personalities and institutions in Europe.”

Antisemitism in the US
Bigotry
Extremism
Blog

A subset of high-profile, misinformation-laden posts reached a combined potential audience of more than 108M followers, with over 1.1M likes and retweets prior to ADL
Cyberhate
Extremism, Terrorism & Bigotry
Blog