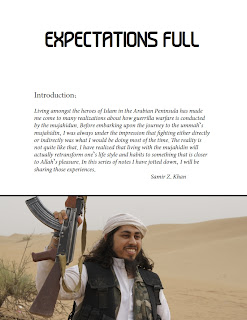 A recently released English-language booklet that both describes life in Yemen as an Al Qaeda in the Arabian Peninsula (AQAP) fighter and encourages westerners to carry out attacks inside their home countries is the latest in a series of AQAP publications demonstrating its commitment to reaching western audiences with its violent message.

The publication, “Expectations Full,” was purportedly written by Samir Khan, the American terror propagandist who was killed in a September 2011 drone strike in Yemen. The booklet encourages “brothers in the West to wage jihad inside their countries” because the effect is “much greater, it always embarrasses the enemy, and these type [sic] of individual decision-making attacks are nearly impossible for them to contain.”

The phrase “individual decision-making attacks” is an apparent reference to the “Lone Wolf” phenomenon, where individuals self-radicalize, often online, without any face-to-face interactions with established terrorist groups.

Despite advocating for individuals to carry out attacks in the West, the booklet is mostly devoted to giving “fellow Muslims a sense of the live [sic] of a mujahid,” including issues such as cleanliness, living on base, secrecy, injuries, training and family life.

“Now that you know what to expect [abroad],” the booklet concludes, “you can compare that with doing jihad in the west, weigh the pros and cons, and make your decision.”

Over the last several years, English-language terrorist propaganda has given conflicting messages about where it is most preferable to carry out attacks. AQAP’s English-language terrorist magazine, Inspire, believed to be produced by Khan until his death, repeatedly encouraged its readers to carry out attacks wherever they reside. Al Qaeda spokesperson Adam Gadahn similarly encouraged Americans to attack within the U.S. in a June 2011 message. At the same time, Omar Hammami, an American spokesperson for Al Shabaab, has called on his listeners to come “to the lands of jihad as soon as possible.”

Although AQAP claims that Khan is the author of “Expectations Full,” the document itself bears no indications or hallmarks of his writing. In fact, in one of the sections the author discusses living on bases without access to any electronics, which would be ironic for someone who is best known for creating online propaganda. AQAP may be trying to leverage Khan’s reputation as an American who made “it to the front lines of jihad” in an effort to reach out to Western audiences and spread its call to fight, preferably while staying at home.

The release of the publication closely follows the release of two new issues of the terrorist magazine Inspire and a tribute to Osama bin Laden, also in English, earlier this month. The rapid succession of English-language propaganda comes after a lull of several months and is an indication of renewed attempts by AQAP to reach and recruit a Western audience.