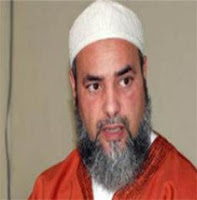 “Algerians must vote because it is about Algeria’s stability, and it is about preserving our country from any foreign interference,” a prominent Algerian cleric said in an interview with Reuters on April 25, adding that Zionists are among the conspirers that seek to meddle in domestic Arab affairs.

In case that wasn’t clear enough, Sheikh Chemseddine Bouroubi added in his widely circulated fatwa, or religious decree, that those who do not vote in May 10 elections will suffer divine retribution.

The North African nation-state has largely baffled Middle East experts for successfully riding out the waves of popular revolt that have become the symbol of the Arab Spring. Although the thirteen year authoritarian rule of President Abdelaziz Bouteflika did encounter a flash of popular protest as revolution swept across neighboring Tunisia, Libya, and Egypt, Bouteflika responded by officially lifting the nation’s 19-year-old state of emergency and promises for gradual reforms.

Decrees demonizing Israel and Zionism, such as the one made by Sheikh Bouroubi, have historically been used by authoritarian Arab states as the preferred method of deflecting popular discontent away from themselves and onto the Jewish state.

In his fatwa, Bourbouri tried to justify his comments that Zionists intend to foment revolution in Algeria by pointing out that a Jewish French-Algerian played a role in persuading President Sarkozy to help overthrow Muammar Qaddafi in Libya. “Listen to what the Zionist Bernard-Henri Levy is saying: ‘Algeria is about to experience an Arab Spring very soon’… What he means by ‘Arab Spring’ is a repetition of the Libyan scenario: blood, killings, destruction.”

Algeria emerged from a bloody and prolonged civil war between the Islamic Salvation Front (FIS) and the central government only when President Bouteflika assumed power.

Jersey City Shooting: What We Know

In his testimony, Greenblatt urged Congress to put more pressure on social media companies to “shut down the neo-Nazis and anti-Semites on their platforms.”
Anti-Semitism in the US
Cyberhate
Extremism, Terrorism & Bigotry
Hate Crimes