Attack on a Louisiana Synagogue: You Can’t Become Complacent About Anti-Semitism—and Here’s Why 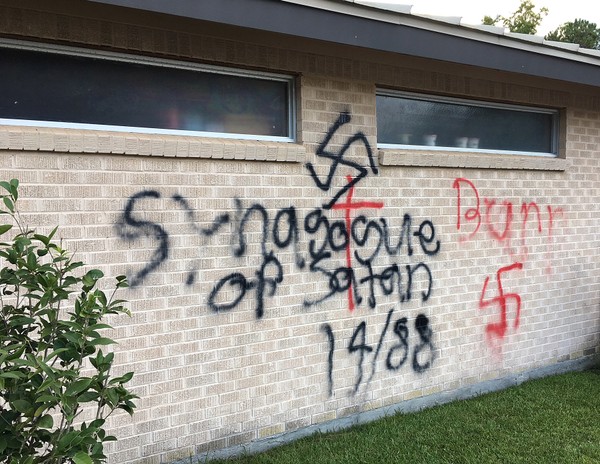 Imagine the terrified, demoralizing feeling of going to your place of worship, and seeing hateful graffiti spread across its walls—graffiti that directly targets and assaults not only your faith, but who you are as a person.

That’s exactly what happened in Mandeville, Louisiana on September 5, 2018, at Northshore Jewish Congregation (NJC). Imagine being Rebecca Slifkin, who worked at NJC, whose concerned neighbors came by to tell her about being shocked and dismayed to notice anti-Semitic words and symbols emblazoned crudely in red and black spray-paint across the side of the building.

Imagine what it would feel like when you walked outside your synagogue, and saw the following images flooding your vision, causing confusion, anger, and pain:

And imagine the relief you might feel if you had somewhere to turn for support and allegiance, for help rallying a response to decry this despicable act. In the wake of this outrageous affront to the Jewish community and the city of Mandeville, Northshore Jewish Congregation turned to the ADL for our guidance and representation.

ADL not only investigated and reported the incident, but also:

People came together by the hundreds—many of whom had never been to the synagogue and from many faiths and backgrounds—rallying support, offering solidarity, and helping to heal the hurt.

While incidents like this unfortunately reflect our world more than ever in 2018, ADL is determined to fight back—with your help. We need to act together now, to address anti-Semitism and hate at its roots, before it causes more damage, destruction, and violence.

ADL is prepared to leap into action whenever and wherever anti-Semitism and other forms of hate appear. Support our work, and help us fight hate for good!