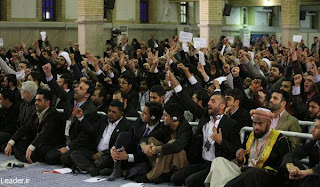 Dhia Al-Sawi, who gained popularity in Egypt for his role in attacking the Israeli embassy in Cairo last year, attended a conference in Tehran, Iran, under the patronage of the Iranian leader Ayatollah Khamenei. The conference, held in the Iranian capital last week, was billed as “The International Conference for Youth and the Islamic Awakening.”
Representing the “Egyptian youth,” Al-Sawi delivered a speech declaring that it was an honor to be involved in the attack on the “Zionist” embassy in September 2011. Asserting his support for Hamas and Hezbollah and his opposition to the State of Israel, Al-Sawi, stated “We are close to liberating Palestine. Just as we attacked the Zionist embassy in Cairo, a day will come, when we will liberate the prisoner mosque of Al-Aqsa.”
Al-Sawi further called on Arab and Muslim nations to unite in support of Iran’s nuclear program. “The Muslim nation and especially the new Arab revolutions should line up to support Iran’s right to possess nuclear knowledge and technology… If the Zio-American alliance and the West succeed in this battle, we will never obtain this technology.”
Al-Sawi’s speech concluded with a request that Khamenei proclaim May 15, Israel’s Independence Day, as a day to cleanse the Arab and Islamic world of Zionist embassies and consulates and attack them. In response to his request, the crowd cheered and chanted, “Death to Israel.”
Hundreds of Islamist leaders from more than 73 countries attended the conference, according to a recording of the event.
Previous Blog
Boko Haram’s Capabilities…
Next Blog
Younes Abdullah Muhammad…

Anti-Semitism in the US
Extremism, Terrorism & Bigotry