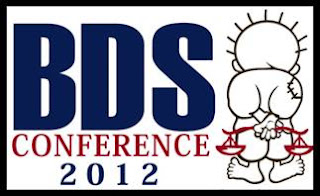 The University of Pennsylvania is set to play host to a major strategy conference next month for the Boycott, Divestment and Sanctions (BDS) movement against Israel. A group called PennBDS announced that the conference will take place on campus over the first weekend in February and has invited many of the significant players in the domestic anti-Israel movement, including representatives from the US Campaign to End the Israeli Occupation and Jewish Voice for Peace.

Scheduled speakers advocate a variety of strategies used to delegitimize Israel, including “lawfare” initiatives, boycott campaigns against Israeli products, campus divestment resolutions and claims of “pink-washing,” which argue that Israel’s progressive attitudes on LGBT issues are an effort to whitewash its human rights policies regarding Palestinians.

The Proudest Blue: A Story of Hijab and Family

61% of Americans Agree with an Anti-Semitic Stereotype; Rep. Tlaib Called On to Apologize for Retweeting False Claim About Israelis; Holocaust Education Bill Passes in House

Anti-Semitism in the US