Skip Navigation
ADL TRACKER
Check out the new ADL TRACKER of Anti-Semitic Incidents
Find Your Local ADL
Anti-Defamation League
In the latest demonstration of its evolving capabilities, Boko Haram, a militant group seeking to create an Islamic state in Nigeria, claimed responsibility on Tuesday for carrying out a suicide car bombing at the Nigerian military headquarters in the north-central city of Kaduna and another bombing at a nearby airbase. 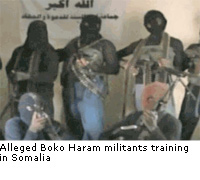 The tactic employed at the military headquarters – a suicide bomber dressed as a member of the military – may demonstrate the continuing influence of Al Qaeda in the Islamic Maghreb and Al Shabaab, Al Qaeda’s affiliates in North Africa and Somalia, on the group’s operational capabilities. AQIM and Al Shabaab’s growing ties to Boko Haram also raises the specter that the group may seek to emulate their strategy of undertaking international attacks targeting Western interests.
Although the group has not carried out attacks outside Nigeria, Boka Haram has expressed intent to expand its targets globally, including the United States. Following its August 2011 bombing of a United Nations building in the Nigerian capital of Abuja, multiple Boko Haram leaders cited opposition to Western powers as the driving factor behind the attack. In a March 2010 interview with Western media, a man claiming to be a Boko Haram spokesman identified the U.S. as “the number one target for its oppression and aggression against Muslim nations… and its blind support to Israel.”
The threat posed by Boko Haram has not gone unnoticed. General Carter Ham, commanding officer of the United States Africa Command (AFRICOM), has indicated that he believes Boko Haram poses a threat to the United States and U.S. interests. In November 2011, Congress held a hearing on the threat posed by the group “to the U.S. Homeland.”  West African nations have also held regional security summits concerning Boko Haram’s ability to act beyond Nigeria’s borders, concentrating on its links to other terrorist organizations.
Previous Blog
Israeli Apartheid Week Video…
Next Blog
Attacker of the Israeli…

There are many sects which refer to themselves with variations of the name Black Hebrew Israelites. Some, but not all, are outspoken anti-Semites and racists.
Anti-Semitism in the US
Extremism, Terrorism & Bigotry
tools and strategies

What is the Anti-Semitism Awareness Act Really All About?

ADL takes a closer look at this important piece of legislation recently introduced in the House and Senate.
Anti-Semitism in the US