Celebrating Chanukah at the Vatican 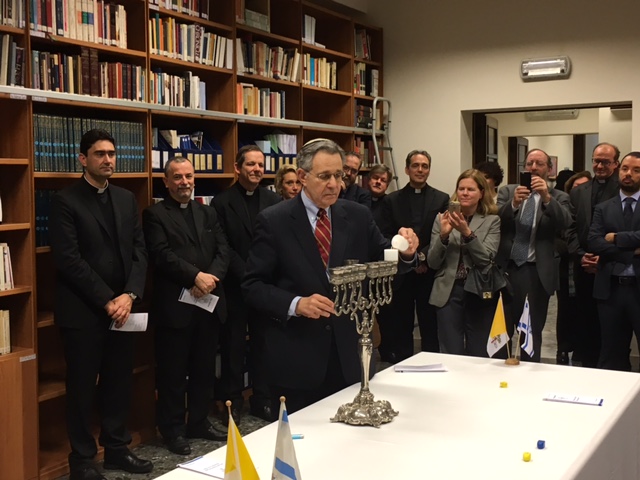 On the first night of Chanukah, Mr. Oren David, Ambassador of Israel to the Holy See hosted a festive reception in the library of the Vatican’s Commission for Religious Relations with the Jews. The reception was not only in honor of Chanukah, but also to acknowledge the visit to the Vatican by a delegation from the International Jewish Committee on Interreligious Consultations (IJCIC).

Ambassador David welcomed all the guests. Cardinal Kurt Koch, president of the Commission, said a few words and lit the shamash (the “servant” candle used to light other candles). Rabbi Daniel Polish, chair of IJCIC, briefly explained the holiday and lit the first candle, and Rabbi David Rosen of Israel, American Jewish Committee’s International Director of Interreligious Affairs, a veteran of interreligious relations and a well-known figure in Rome, led the blessings.

Among the guests were other Vatican officials from the Congregation for Promoting Christian Unity and the Secretariat of State, as well as scholars from the Cardinal Bea Center for Jewish Studies and the Pontifical Biblical Institute. Also in attendance were the president of the Jewish community of Rome and the chargé d’affaires at the American Embassy to the Holy See.

IJCIC has been described as a miracle brought about by the Vatican. The Second Vatican Council and the promulgation of its declaration Nostra Aetate inaugurated a sea change in Jewish-Catholic relations; every Jewish organization suddenly wanted to meet with the Vatican and have audiences with the pope, an overwhelming proposition for the authorities in Rome.

In the early 1970’s, at the behest of the Vatican, the major Jewish civic organizations and the three major denominational movements formed IJCIC and for over forty years it has served as the Vatican’s official dialogue partner from the Jewish community. IJCIC’s membership today consists of the major international Jewish civic organizations (ADL, American Jewish Committee, B’nai B’rith, World Jewish Congress), the Orthodox Union and the Rabbinical Council of America; the United Synagogue of Conservative Judaism and the Rabbinical Assembly; the Union for Reform Judaism and the Central Conference of American Rabbis; and the Israel Jewish Committee for Interreligious Relations.

Given the tensions between the various sectors of the Jewish community and especially between the religious streams, that such an organization has lasted as long as it has and continues to work effectively by consensus can rightly be described as a miracle!

The other miracle celebrated that evening is the transformation of Jewish-Catholic relations since Vatican II. Rabbi Polish remarked that neither the grandparents of the Jews in the room, nor those of the Catholics, could ever have imagined an event like taking place, let alone in the Vatican. And yet here we all were, greeting old friends, eating latkes (potato pancakes) and soufganiyot (filled doughnuts) and wishing each other l’chaim over glasses of kosher prosecco.

Admittedly, there have been difficult moments over the last 40-plus years,. Among these are the controversy over the Auschwitz convent; the visit of Kurt Waldheim to the Vatican, the question of the Vatican archives, and the canonization of Pope Pius XII (some of which are not fully resolved). And while Israel and the Holy See established diplomatic relations in 1993, the two sides have yet to sign the final agreement, though it seems that only a few minor issues remain.

On this visit, however, our delegation took note that we did not come to Rome with a list of burning problems that needed to be addressed, but rather to renew our relations with the Commission for Religious Relations with the Jews and to expand those with other Vatican offices, as well and to discuss how we might work together on common concerns such as migration, the threat of extreme nationalism and religious fundamentalism, persecution of religious and ethnic minorities,cyber-hate, and the environment.

In a world in which conflict and division seem to be increasing, the relationship between the Jewish and Catholic communities, like the Chanukah candles, can serve as example of the power light to banish darkness, of respect and friendship to replace enmity and distrust. It is truly a miracle worth celebrating.