Congress Needs to Act to Save the U.S. Refugee Resettlement Program 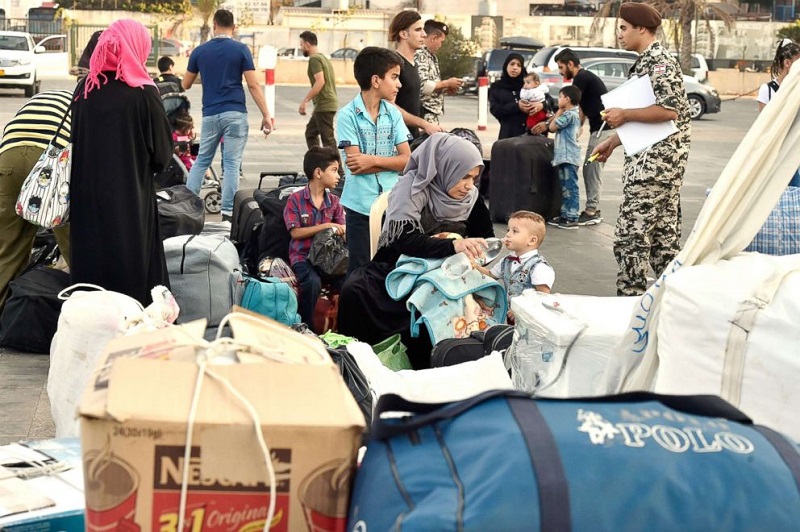 Mainstreaming Hate: The Anti-Immigrant Movement in the U.S.

On the heels of the implementation of an interim final rule that all but ends asylum protections for Central American and other migrants and the further expansion of the administration’s Remain In Mexico policy, several reports last week indicated that the Trump Administration may also be considering slashing refugee admissions to the U.S. to zero next year, essentially halting the U.S. refugee admissions program.

The U.S. has historically resettled more refugees than any other country—about 3 million since 1980. For nearly 40 years, the annual refugee resettlement target averaged 95,000 refugees from all over the world, representing only .001% of the total number of refugees and displaced persons worldwide.  According to the Migration Policy Institute, annual refugee admissions ceilings reached a peak of 142,000 in 1993 in response to the Balkan wars. The ceiling then ranged from 70,000 to 91,000 between 1999 and 2016.  And the Obama Administration raised the ceiling to 85,000 in fiscal year 2016 and 110,000 in fiscal year 2017.

Despite the fact that the number of refugees fleeing persecution and violence around the world has steadily increased, reaching a record high of 68.5 million people by the end of 2017, the Trump Administration has since abruptly lowered the refugee admissions ceiling each year and implemented “extreme” vetting procedures.  Specifically, it lowered the 2017 refugee admissions ceiling from 110,000 to 45,000 in 2018, with fewer than 50 percent of refugees admitted.  Indeed, according to the Pew Research Center, 2017 also marked the first time the U.S. resettled fewer refugees than the rest of the world.  By the end of 2017, the U.S. had resettled about 33,000 refugees while other nations collectively resettled a total of 69,000 and only about 22,500 refugees were resettled in the U.S. in 2018.  The U.S. fell behind Canada in 2018 as the top resettlement country, and the admissions ceiling was further slashed to 30,000 in 2019.  In just the first seven months of fiscal year 2019 (October 1, 2018-April 30, 2019), only approximately 15,000 refugees had been resettled.

While purporting to justify such cuts and restrictions by citing security and safety, the restrictions and cutbacks on the refugee resettlement program have not made the process more secure. Former CIA directors, national security advisors and secretaries of defense, state, and homeland security have instead advocated that in order to ensure public safety, “we should recognize that refugees serve as a source of national renewal.”  The proposal to further slash the refugee admissions ceiling has reportedly also alarmed current officials at the Department of Defense who have raised concerns about the potential impact on the admissions of Iraqis who have assisted U.S. military forces.  In reality, therefore, the administration’s attacks on the country’s refugee admissions programs have been marked by intentional and deliberative steps to all but end the U.S. refugee resettlement program, shut our country’s doors to refugees and asylum seekers in need of safety, and allow prejudice and bigotry to be injected into policymaking. And such steps come amidst the worst refugee crisis since World War II with more than 25 million refugees worldwide in need of safety and 1.4 million in need of resettlement globally.

Coupled with additional administrative efforts to bar access to asylum, the shameful decimation of the refugee resettlement cap would effectively mean a total halt to refugee admissions—or a ban on refugees.  Such a halt would have lasting impacts regardless of the next administration. The reduction of resources would create long-term damage to the country’s ability to admit refugees in the future.

Not only would the decision mean that a huge number of people fleeing for their lives could not access safety, find refuge, or be reunited with their families—it would also severely impact thousands of refugees who are already in the process of seeking refuge in this country, but have been caught in endless red tape. According to refugee resettlement agencies, nearly 40,000 refugees are already approved and at various stages in the resettlement process. They would be forced to potentially endlessly wait, despite already being approved for resettlement in the United States.

As Jews, we know that this is not the first time the U.S.—a nation of immigrants—has shut its doors to refugees and turned a blind eye to those desperately seeking safe harbor. The U.S. Refugee Resettlement Admissions Program (USRAP) was established by faith communities coming together in the wake of World War II to resettle refugees from Nazi Germany. At the time, government officials—from FBI agents and members of the State Department to President Roosevelt himself—argued that refugees posed a serious threat to national security. Reminiscent of the xenophobia motivating anti-refugee policies today, anti-Semitism was also an undercurrent of the push to deny Jews refuge at the time. It was wrong then, just as it is wrong today.

Turning our backs on people fleeing for their lives defies the proud promise indelibly inscribed on the Statute of Liberty. It undermines U.S. obligations under international law and abdicates our commitment to those who support the U.S. in combat.

As citizens of the world and fellow human beings, we all have a moral responsibility to open our hearts and doors to refugees.  In the face of such threats from this administration, Congress must step in and increase our country’s refugee admissions cap to at least 95,000 per fiscal year.

The heartless attacks on refugees must end. Our nation’s core values hang in the balance.