Anti-Defamation League
Antisemitism in the US 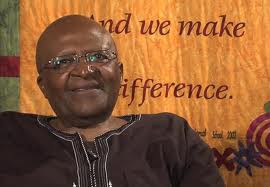 Although the resolution was rejected at the United Methodist Conference currently underway in Tampa, Florida, Tutu’s last ditch attempt to avert defeat veered into classical religion-based anti-Semitism when he speaks of the punishment of the Jews in the past who “disobeyed G-d:”

Hebrews…were oppressed as slaves in another land. As time moved on, this people disobeyed God and time and time again the prophets had to call them back to their deepest values.

Tutu then calls on activists to take action to punish Israel for their policies today:

But God, who is the same yesterday, today and forever, neither slumbers nor sleeps. Prophetic voices have been calling this empowered people who were once oppressed and killed, to their deepest values of justice and compassion, but they have refused to listen even to the most reasonable voices. The human community cannot be silent in the face of the gross injustice being meted out to the people of Palestine. If international courts and governments refuse to deal with this matter, we in the churches and in the rest of civil society really have no choice but to act in small ways and big ways.

Tutu also uses shocking language about the Holocaust, including an apparent condemnation of the very founding and existence of the State of Israel:

The Jewish Holocaust, engineered and implemented primarily by Europeans, gave some ideologues within the Jewish and Christian community an excuse to implement plans that were in the making for at least 50 years, under the rubric of exceptional Jewish security. In this way began the immense oppression of the Palestinian people, who were not at all involved in the Holocaust. Not only is this group of people being oppressed more than the apartheid ideologues could ever dream about in South Africa, their very identity and history are being denied and obfuscated. What is worse, is that Europe and the USA are refusing to take responsibility for their actions with regard to both the Holocaust and the over-empowering of the Israelis, their disregard for the international conventions and regulatory framework of the nuclear industry and their continued oppression of the Palestinian people.

Tutu is a prominent supporter of the BDS (boycott, divestment, sanction) campaign against Israel and a generally harsh critic of Israel. He has declared time and again that Israeli policies towards Palestinians are the same or worse than those imposed against black South Africans under apartheid.

Tutu’s April 26 letter, posted on the website of “United Methodist Kairos Response” (Kairos is a highly problematic anti-Israel document prepared by Palestinian Christians), is a retread of many of his old accusations and assertions.

Tutu appears to be engaging in an all-out campaign to further his anti-Israel agenda. In a May 1 op-ed in The Tampa Bay Times he endorsed action by the Methodist Church, called the 1,200 American rabbis who had signed an open letter to “our Christian neighbors” opposing Church divestment initiatives, “sadly misguided” and said “it is long past time for them to remove the blinders from their eyes and grapple with the reality that Israel becoming an apartheid state or like South Africa in its denial of equal rights…”

Antisemitism in the US
Extremism, Terrorism & Bigotry
Blog

Antisemitism in the US
Extremism
reports

Top 10 Heartbreaking Moments of Hate in 2021, and How ADL Responded