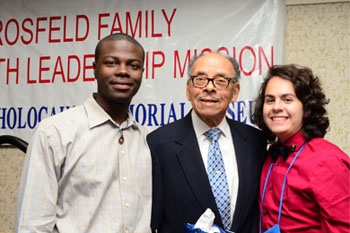 This week, the world lost a true hero. Dr. Leon Bass, who turned his personal and life-altering experiences with racism and anti-Semitism into opportunities to educate, inspire action in others and bear, in word, deed and character, the mandate of “Never Again,” died on Saturday, March 28th at the age of 90. ADL joins the world in mourning his loss.

As a young man, Leon Bass grew up in a country divided by racial prejudice. He often shared with young people that his experiences consistently told him that he “wasn’t good enough” – not good enough to eat in the same restaurants, drink from the same water fountains or sit next to his white neighbors in the local movie theatre. Despite this, when the U.S. joined the allies in World War II, Bass felt a duty to serve his country and enlisted in the U.S. Army. His experience there would bring him face to face with institutionalized racism, mirroring the prejudice he had experienced throughout his life. Along with other enlisted men of color, Leon was placed in a separate totally black unit, along with the unspoken message that, despite their patriotism, despite their willingness to give their lives for their country, they were still not good enough to eat, sleep and serve alongside the traditional mostly white Army.

He was deployed to Europe, and left the world a detailed chronicle of his experiences in a recently-published autobiography, Good Enough. As the war began to draw to a close, Bass found himself stationed near Nuremberg, Germany, where he was one day asked to accompany his commanding officer on a mission to a place Bass had never heard of. That place was the Buchenwald Concentration Camp. He was among the first Americans to enter the camps, and his accounts of what he saw there would haunt him until his final days. He was overwhelmed by the destructive power and consequences of hate that he witnessed in the victims and remaining survivors. He vowed to be a person who would no longer accept the status quo of injustice, a man who would devote his life to making a better, more just world. His life was a testimony to that commitment.

Dr. Bass returned home, pursuing undergraduate and graduate studies, and earning his Doctorate in Education. He became an influential school administrator and leader, and began sharing his story, which made powerful connections between the racism he personally experienced and the virulent anti-Semitism he witnessed inside the gates of Buchenwald.   And his story inspired action in hundreds of thousands of young people across the country. For many years, Dr. Bass was an integral part of ADL’s Grosfeld Family National Youth Leadership Mission to the U.S. Holocaust Memorial Museum in Washington D.C. He was consistently described by participants as one of the most meaningful parts of the program year after year. At last year’s Mission in October 2014, a group of 150 students, ADL staff, lay leaders and friends from across the country were given the gift of hearing what would be Dr. Bass’s last telling of his powerful and compelling story, and many were brought to tears and inspired to take action against hate.

We at ADL count ourselves fortunate to have had a very long friendship and collaboration with Dr. Bass.  His unique gifts as a storyteller; his ability to effectively connect the past and the present, the personal and the global; his tireless dedication to make a more just and equitable world; his ability to inspire action through the way he lived his life; and his living example of what it means to be a true hero are hallmarks of who Dr. Leon Bass was and why we will greatly miss him.