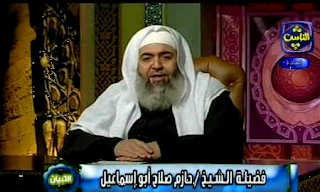 Egyptian presidential candidate Hazem Salah Abu Ismail, who wants to abolish Egypt’s peace treaty with Israel, has a history of promoting anti-Semitic narratives in his statements against Israel.

In an interview with Al Jazeera in February 2012, Ismail said, “There’s no such thing as the state of Israel. Palestine is from the river to the sea, as it’s said… The Jews are not here on Earth to be rulers.”

In an electoral rally a month before, Ismail attacked the Zionists’ efforts to organize trips to Israel from around the world. The crowds chanted in response: “Oh Jews of Khaibar, the army of Muhammad is here… Oh Jews of Khaibar, Hazem Abu Ismail is here,” evoking the Qur’an’s account of a battle between the prophet Muhammad and the Jews of the town of Khaibar that resulted in the subjugation of the Jews of Arabia.

During a 2011 appearance on the talk show on the Islamic Television channel Mureed Al Janna, Ismail described stories from Torah as sarcastic and scandalous and said that even Jews doubt their religion.

Ismail, who is backed by the Salafists, describes the Camp David peace treaty between Egypt and Israel as “scandalous and shameful” in his “Message to the Honorable Egyptian People who Bow to none but Allah,” which outlines his presidential program.

The detailed program, which is available on his campaign’s official website, also includes the following foreign policy note:

“We believe that Israel is illegitimate. Israel has no right in Palestine, but we will not collide with them now; we must stand up on our feet first before we think about standing on the confrontation line. Taking into account the interests of our country is above all other considerations, but this would not be at the expense of our pride and our dignity and our Arabic and Islamic relations.”

The same program calls for building a stronger relationship with Iran in order to both pressure the U.S. and gain economic aid from it at the same time.

During a lecture in February 2012, Ismael called Osama Bin Laden a martyr, saying that “I ask God to accept him among the martyr saints and the righteous ones…. We ask God to enable Muslims to revenge for his death.”

Following Sacha Baron Cohen's speech, here is ADL's short list of social media accounts that should have been removed long ago

The Executive Order by the Trump Administration aims to provide valuable guidance on anti-Semitism, giving law enforcement and campus officials an important additional tool to help identify and fight
Anti-Semitism Globally
Anti-Semitism in the US
Blog