It’s Election Day (finally!) and the Anti-Defamation League is monitoring extremist activity online and at the polls. While ADL is non-partisan and does not support or oppose candidates for office, we believe it is important to report on election-related extremist threats, as well as various conspiracy theories and calls to action.  Our Center on Extremism team will be updating this blog throughout the day.

Note: Some of the “voter fraud” allegations are coming out of the pro-Trump camp, but others appear to originate with Bernie Sanders supporters who are apparently still angry about the Democratic Party primary results.

Inaccurate or fabricated viral news articles alleging election/voter fraud are being widely shared on Facebook by angry Trump supporters who believe the election is being rigged.

Extremists and conspiracy theorists are taking to Twitter, Facebook and many other social media platforms to voice their paranoid ideas about the election process. 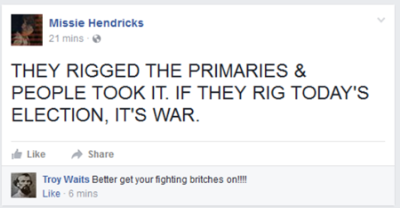 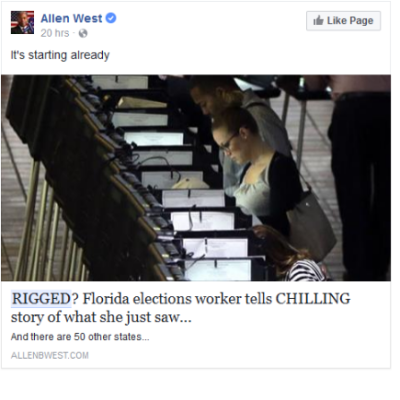 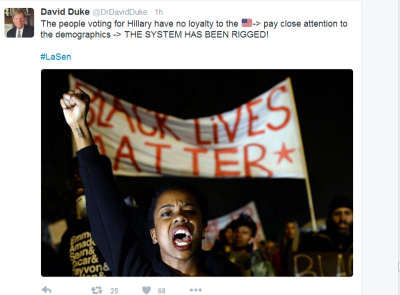 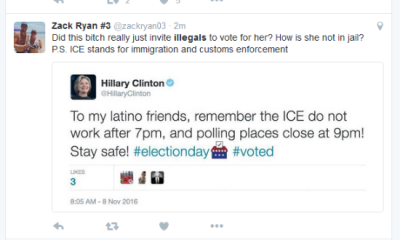 One wrote: “We need a march on the White House if Clinton wins…We could form a huge group… ” and another responded: “…with torches pitchforks and rope”

I am voting for Donald Trump but do not expect him to be announced “THE WINNER”. The Devil Jews are going to say Hillary Rob’em Clinton won and give the office to her. There will be a “False Flag” attack by actors pretending to be Trump supporters and those “Evil guns” will have to be banned. Our country is lost. 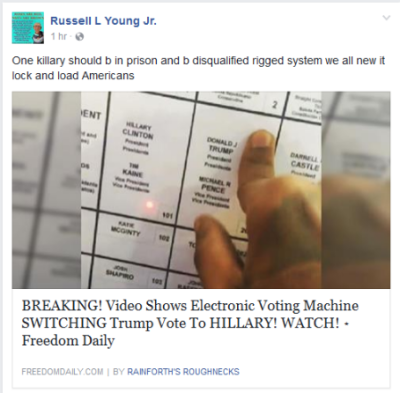 While some extremists have been openly threatening to intimidate likely Clinton voters, others are voicing concern (real or imagined) about being intimidated themselves.

Anti-Semitism has been a constant thread throughout this election cycle, and is on full display in Election Day posts and commentary. 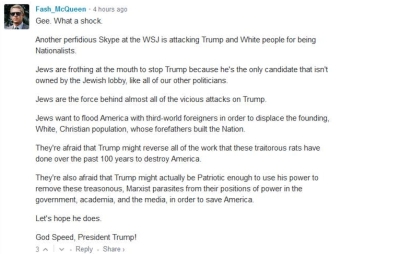 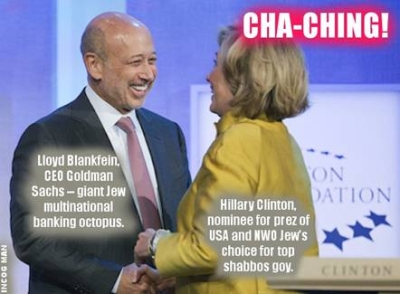 “The Jews are lashing out in rabid fear, and I hold no doubts that they will unleash their full arsenal upon us and our GLORIOUS LEADER before the final votes are tallied…Like many of you, I’ll be watching the results surrounded by my loved ones ready to celebrate when we tear out the black hearts of these rotten Kikes by seizing the highest position in this land… Do it for the young, including my unborn first son that is praying from the womb for a chance at a happy and fair beginning, and for the old, including my elderly mother (born in Germany during the final days of the Third Reich) who wishes to see 1945 and the millions of her dead racial kindred avenged.

So today, on this 8th of November in the year of our Lord 2016, rise up, White Man, and unleash the storm!” 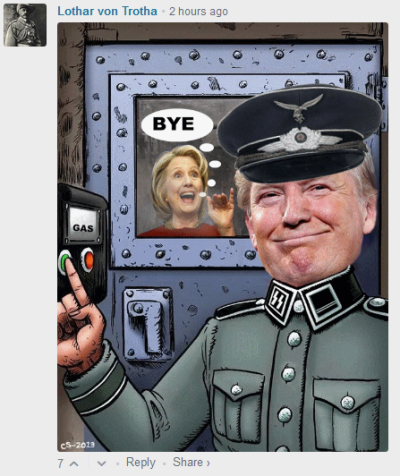 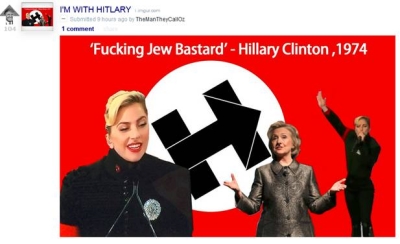 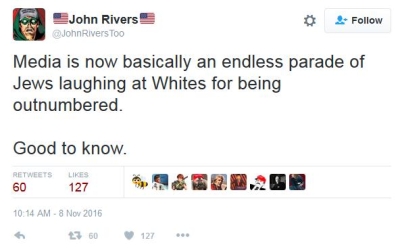 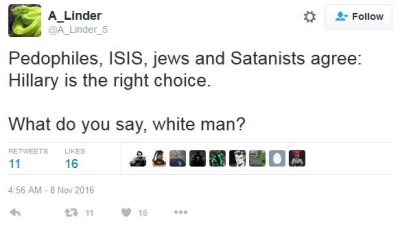 This election cycle has been characterized by violent rhetoric, outright threats and occasional acts of violence. Extremists and others anxious about the results of the presidential election are vowing to retaliate in case of a Clinton victory.

What if we lose?
Then we'll meet irl. 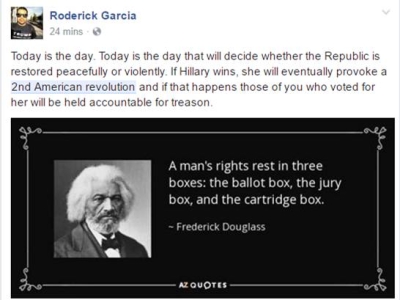 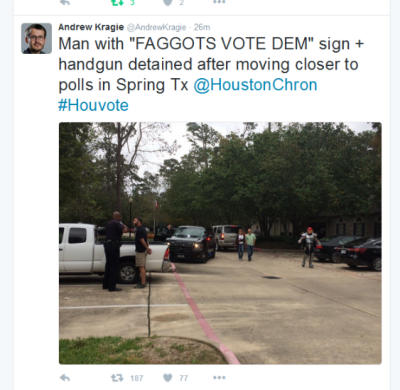 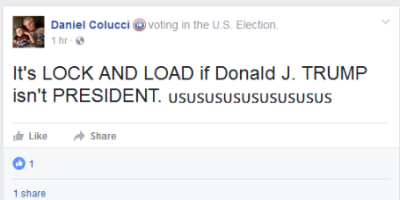 “Republicans stocked up on plenty of bullets ahead of time. There are plenty to go around for you Democrats.” 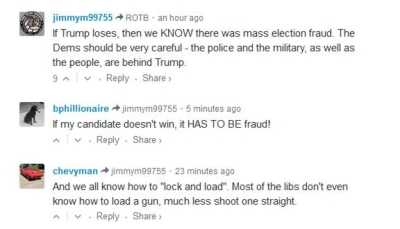 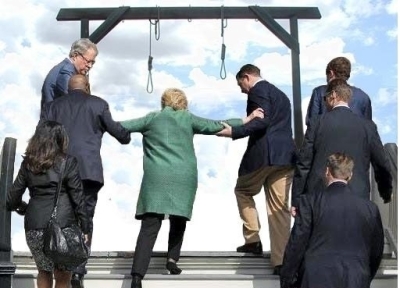 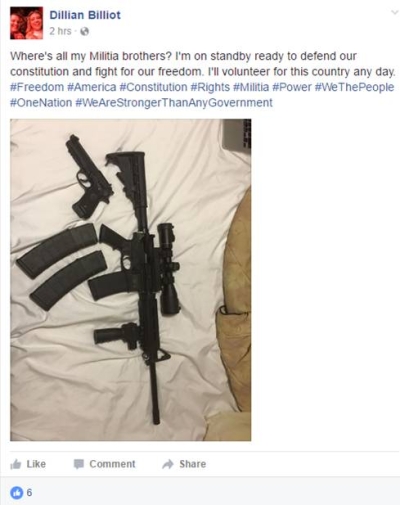 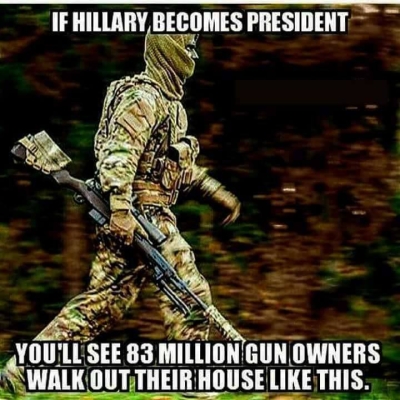 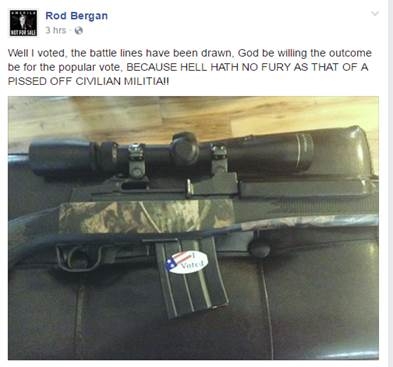