A subset of high-profile, misinformation-laden posts reached a combined potential audience of more than 108M followers, with over 1.1M likes and retweets prior to ADL reporting them to Twitter on November 4, 2020. From the time ADL reported the tweets to Twitter on November 4 until our final check on November 9, we found that the misleading tweets that remained unaddressed by the social media platform had been liked or retweeted more than 297,000 additional times. Tweets included false statements about voter fraud, inaccurate claims regarding the winner of the presidential election, and other baseless claims regarding fraudulent election practices.

In advance of the 2020 elections, Twitter announced  that it would label claims of early victory, electoral fraud, and other forms of misinformation as contentious before all votes were counted. ADL’s Center for Technology and Society conducted a brief search and analysis on November 4th, the day after the election to see how well the platform acted on its statements.

Our investigators initially found troubling tweets posted by prominent users that were not labeled by the platform for hours and, within a short period, had racked up tens of thousands of likes and retweets. Although Twitter actioned many false and misleading posts flagged by ADL after our investigators reported them, its action was not swift enough to prevent the spread of misinformation around the election.

On the evening of November 4, the day after the election, ADL flagged 145 unique tweets for Twitter’s review. These tweets had a high likelihood of containing misinformation about the electoral process, and Twitter had taken no action against them. While 145 tweets is a very small amount for Twitter—a platform that averages over 500 million tweets every day—this set came from 86 different high-visibility accounts with a combined total of more than 108 million followers. At the time of our initial observations, these tweets had received more than 1.1 million likes and retweets.

We re-investigated these tweets several times to monitor Twitter’s response following our report. The next check on November 5 at 3:30 PM EST, 19 hours after ADL first heard back from Twitter, revealed that 88 of the 145 reported tweets had been removed from view, labeled as misinformation, labeled with election security information, or determined to be non-violative. But ADL found that 39 percent of the tweets we had flagged were still visible, without informative labels, and remained retweetable. Between the time ADL initially compiled the list and when we performed the first check on November 5, these unaddressed 57 tweets were liked and retweeted an additional 272,000 times and reached a potential audience of over 107 million followers.

A second check at 11:00 AM EST on November 6 found that Twitter still had neither removed nor labeled 19 tweets that ADL had determined were violative — meaning that 13 percent of the original 145 tweets our analysts flagged as containing misinformation remained unaddressed. Those tweets had garnered over 20,000 likes and retweets since the previous check 20 hours earlier.  Many of these tweets were generated by high-profile users with large numbers of followers which means that tweets containing misinformation were still reaching a potential audience of over 93 million followers.

The third and final check occurred at 5:00 PM EST on November 9. Investigators found an additional two tweets had been labeled. This left 17 tweets (11.7 percent) unaddressed. In the period since the previous check, on the morning of November 6, those tweets were liked and retweeted an additional 5,000 times, still reaching a potential audience of over 93 million followers.

As of the time of this writing on November 11, 2020, these two tweets are among those that remain unlabeled: 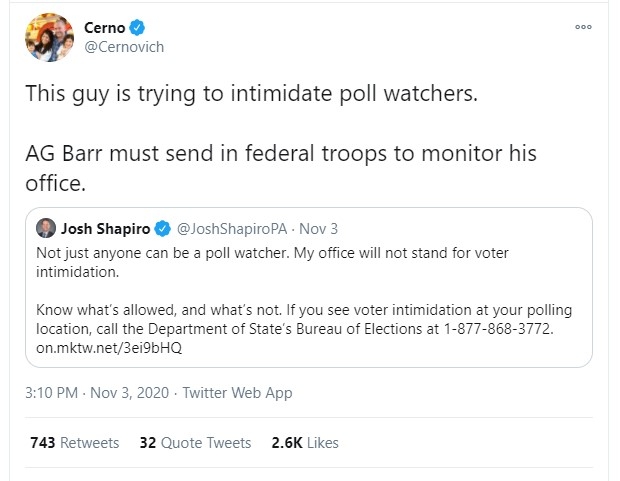 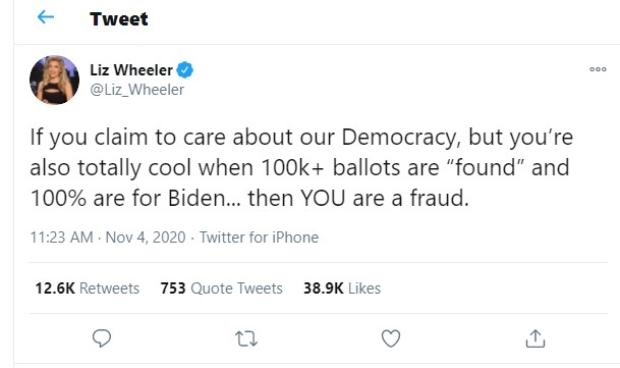 Thus, many of the tweets ADL flagged containing misinformation and posted by users with huge numbers of followers were left unlabeled by Twitter over a day and a half after Election Day. Those posting these tweets include the founder and president of an organization that organizes high-school and university students for conservative causes, a Hollywood actor, and a well-known writer.

Twitter’s stated commitment to stemming election-related misinformation is commendable, but this data points to a troubling trend; if and when the platform acts, it is often too late. The delay in response leads to significant additional engagement given the fast pace of social media. Within minutes of posting, millions of users see destructive conspiracy theories and false information.

Platforms must enforce their policies consistently and at scale—especially in critical moments for our democracy—to be effective.

CORRECTION: In an earlier version of this post we made a mistake in our initial reporting, resulting in a claim that, 19 hours after we first contacted Twitter, the platform had not addressed 56 percent of the tweets ADL flagged. We wrote that those tweets yielded over 1.9 million total likes and retweets with an audience of over 118.8 million. The correct numbers are 39 percent of the reported tweets had not been actioned, a number that had garnered 1.1 million likes and retweets, with a potential audience of more than 108 million followers. We made corrections in this version and apologize for the error.

However, our updated observations still reveal a sizable portion of tweets that go unaddressed by the platform during this pivotal time. Thirty-nine percent remains a startlingly high figure. ADL urges Twitter and other platforms to continue to improve their efforts around moderating content during high-stakes moments such as a presidential election.

UPDATE: In an earlier version of this post, we pointed out an apparent bug in Twitter’s display of labeling data on four of the tweets. Twitter has since corrected this. We have also included additional information about Twitter’s actions after 11:00 AM EST on November 6.