Extremist-related Shootouts with Police Soar in 2020 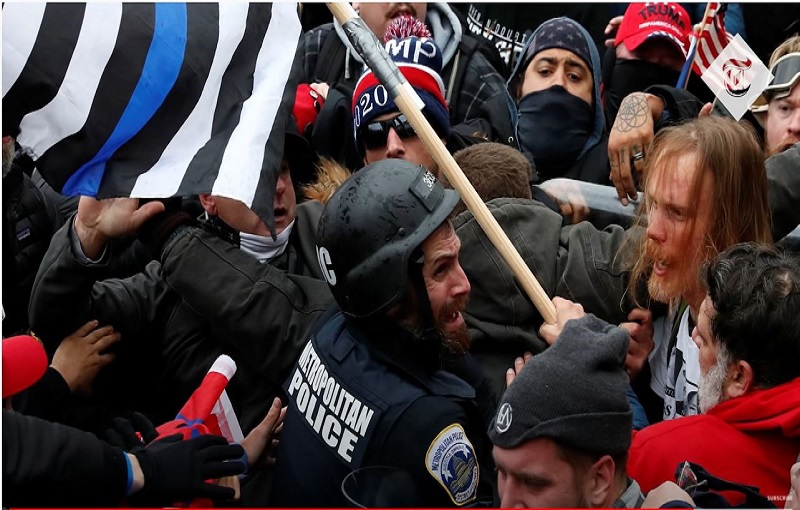 During the January 6, 2021 attack on the U.S. Capitol, a violent mob of extremist Trump supporters—reinforced by a broad coalition of right-wing extremists—attacked police, who appeared to be caught unprepared for a violent encounter with a crowd that has been loudly and consistently supportive of law enforcement. The siege left roughly 140 officers injured, including U.S. Capitol Police Officer Brian Sicknick, whose injuries were fatal.

One of the insurgents, Ashli Babbitt, a QAnon follower, was shot and killed by Capitol police as she attempted to breach a barricaded door leading to the Speaker’s lobby, while lawmakers and officials were being evacuated. This incident marks the first time in which shots were fired between police and extremists in 2021—and illustrates how quickly extremists can turn on law enforcement.

Over the course of 2020, ADL’s Center on Extremism documented 16 incidents in which police and extremists exchanged gunfire, a considerable increase from the 11-year average of nine per year. During these incidents, extremists shot at least ten members of law enforcement. Three of those shootings were fatal.

As has been the case in every previous year of this 12-year study, an overwhelming majority (87.5%) of the 2020 incidents involved right-wing extremists. The 16 incidents included eight anti-government extremists, six white supremacists, one Islamic extremist and one left-wing extremist.

These numbers also highlight the critical need for law enforcement and the general public to recognize and understand emerging extremist threats. At least two of the anti-government extremists involved in 2020 violent incidents were connected to the boogaloo movement, a new movement that features a loose anti-government and anti-police ideology. In 2020, boogalooers increasingly engaged in real world offline activities and were arrested for crimes up to and including murder and terrorist plots. Two of the extremists killed by police during these incidents, Duncan Lemp and Eric Allport, now serve as martyrs for the boogaloo and broader anti-government movement.

Albuquerque, New Mexico, October 2020: Self-described white separatist and racist skinhead Jason Edward Galliart died of a self-inflicted gunshot wound following a stand-off with Albuquerque police. The incident began when police responded to reports of a person shooting from inside a motel room. Following an hours-long standoff, two SWAT team members shot Galliart when he exited the room through a window holding a handgun. Wounded by police gunfire, Galliart shot himself in the head.

Madison Heights, Michigan, October 2020: Anti-government boogalooer and convicted felon Eric Allport was shot and killed during a shootout with FBI agents who were attempting to arrest him on federal weapons charges. One FBI agent was wounded in the shootout. Allport, who had a criminal history that included shooting at two Colorado officers in 2002, also had a peripheral connection to the infamous Ruby Ridge standoff.

Paso Robles, California, September 2020: Christian Michael Straub, a convicted felon and white supremacist gang member, was shot and killed by San Luis Obispo County Sheriff's deputies after he allegedly opened fire on them. One deputy was shot in the lower leg. The incident began when the deputy recognized the man as having felony warrants and attempted to stop him.

Detroit, Michigan, September 2020: Thomas Curry killed himself during an armed standoff and hostage situation in Detroit that began after Curry fired at a police officer following a traffic stop and chase. Curry was the suspect in a June 11, 2020 triple homicide of three people associated with an outlaw biker gang. Curry was part of that subculture, but also a white supremacist who had white supremacist tattoos, a Nazi flag, and used the online alias of "Michael Heiliger," which was a fake name used by Nazis during World War II for bank accounts used to hold money and valuables seized from persecuted Jews.

Lacey, Washington, September 2020: Michael Reinoehl, an antifa activist, was shot and killed by officers assigned to a federal task force as they attempted to arrest him on a murder warrant for the August 29 shooting of Aaron Danielson, a Patriot Prayer supporter in Portland. The officers involved in the shooting told investigators that before he was shot, Reinoehl pointed a gun at them. A handgun was recovered from shooting the scene and an AR-15 was found in his nearby vehicle.

Ferdinand, Idaho, July 2020: Anti-government extremist Sean L. Anderson is facing charges of felony aggravated assault on a law enforcement officer following a shootout with deputies from Lewis and Idaho counties and a Nez Perce Tribal officer. The shootout occurred after Anderson allegedly drove away from a traffic stop and led police on a long-distance pursuit. None of the officers were injured.

Columbus, Ohio, July 2020: Sovereign Citizen Monica Greer Justice faces two charges of felonious assault following a shootout with police at her home in North Linden, Ohio. The incident began when Justice allegedly shot and wounded two Franklin County deputies who were attempting to serve a probate warrant related to a landlord-tenant dispute. According to police, Justice then barricaded herself in the home resulting in a 7-hour standoff which ended when police apprehended her on the roof of the home.

Ben Lomond, California, June 2020: Air Force sergeant Steven Carrillo was arrested after allegedly opening fire on police officers in an ambush that killed one of them. Police were seeking Carrillo because he had allegedly been linked to a May 29 shooting in Oakland that killed a Federal Protective Service security guard. According to the FBI, Carrillo was associated with the boogaloo movement and investigators found a ballistic vest with a boogaloo patch in his vehicle. Prior to his arrest, Carrillo allegedly wrote the word “boog” in blood on the hood of a vehicle he had hijacked. Carrillo has been charged with 19 felonies, including murder and attempted murder. An accomplice, 30-year-old Robert Justus, who allegedly drove the vehicle during the May 29 attack, is facing charges of aiding and abetting murder, as well as attempted murder.

Brooklyn, New York, June 2020: Dzenan Camovic, a Bosnian national, has been charged with robbery and firearms offense in connection with an ambush attack of two New York City police officers. During the attack, Camovic allegedly shouted "allahu Akbar" and slashed one officer in the neck with a knife before taking the officer's weapon to fire at responding officers, shooting one officer in the hand. Officers returned fire, wounding Camovic who was then taken into custody. Federal investigators say Camovic possessed a significant volume of jihadist propaganda and was motivated by ISIS-inspired ideology.

Geneseo, New York, May 2020: Joshua Blessed, a truck driver from Harrisonburg, Virginia, was shot and killed during a shootout with police after police pursued him through three counties. The incident began when Blessed was stopped for speeding in Le Roy, but fled the scene, opening fire on pursuing officers. After the shootout, officials conducting lawful searches of Blessed’s property found a stockpile of explosive devices. A review of Blessed’s online activity indicates that Blessed held extreme religious and anti-law enforcement views, and visited a website frequented by individuals associated with the anti-government militia movement.

Ely, Nevada, March 2020: John Dabritz, whom enforcement officials described as displaying signs of anti-government extremism, allegedly shot and killed Nevada Highway Patrol Sergeant Ben Jenkins when he stopped to check on Dabritz, who had pulled over along a highway. Prosecutors believe Dabritz killed the trooper in order to avoid arrest for a series of recent shootings of propane tanks, tanker trucks, and wind turbine infrastructure, which prosecutors have described as acts of terrorism.

Belton, Missouri, March 2020: White supremacist Timothy Wilson of Raymore, Missouri, died during a shootout with FBI agents conducting a sting operation on him. Wilson showed up for a meeting with the FBI agents to pick up an inert explosive device he had sought to obtain from the undercover officers, which he intended to use to target a local hospital. Wilson, who was associated with two Neo-Nazi groups and was the subject of a long-running federal investigation, reportedly referred to his plot as “Operation Boogaloo.” It is not clear if Wilson was simply using the term “boogaloo” or if he had actively been involved in the boogaloo movement itself.

Potomac, Maryland, March 2020: SWAT offcers with the Montgomery County Police department shot and killed Duncan Socrates Lemp while serving a no-knock search warrant for possession of weapons by a prohibited person. According to police, Lemp was in possession of a rifle at the time of the incident and refused to comply with their commands. Lemp appears to have been part of the anti-government Three Percenter movement and had recently attended militia training in Kentucky.

West Point, Utah, February 2020: Davis County Sheriff's deputies arrested Zachary T. Mendelkow, a wanted parole fugitive with alleged white supremacist gang affiliations, after he allegedly pointed a firearm near a deputy's face and pulled the trigger several times. No one was injured during the exchange.

Kimberly, Alabama, February 2020: Preston Cheyenne Johnson, an alleged neo-Nazi and convicted felon, has been charged with capital murder in the shooting death of police officer Nick O’Rear, of Kimberly, Alabama. The incident occurred when police in Warrior called for backup after Johnson allegedly refused to stop for an expired automobile tag. When O’Rear responded to the call for help, Johnson allegedly fired shots from his vehicle and killed O’Rear.

Dayton, Ohio, January 2020: Self-described sovereign citizen Derrick J. Lewis was indicted on charges of kidnapping and felonious assault for allegedly firing shots at the police and barricading himself inside his apartment with several hostages. After a 13-hour standoff, a police SWAT team forced their way in and rescued the hostages without injury.