Extremists, Others Respond to President Trump’s Calls to “Stop the Count”

Less than 24 hours ago, the country heard President Trump speak from the White House and make wild accusations of massive voter fraud that appear to be entirely out of line with the facts. He repeated baseless conspiracy theories and called for action. There literally is no precedent for a sitting president to denigrate our democracy and to undermine the integrity of our electoral processes in this manner. But in light of the tension across the country and the demonstrated tendency of right-wing extremists to resort to violence, these charges are not just unprecedented – they are an abuse of power and unequivocally dangerous, like throwing a match into a stack of kindling that could light the country aflame.

As background, President Trump gave a speech on Thursday, November 5 from the White House in which he announced, without evidence, that he had won the election. He went on to describe as corrupt and fraudulent the counting of votes cast prior to and on election day in Georgia, Pennsylvania, Michigan and Arizona. Several news organizations quickly cut away from the address when it was clear the President intended to use the event to highlight the conspiracy theories and lies – the election is being stolen from him; mail-in ballots are fraudulent; the vote counting in every state now at issue is being manipulated by Democrats intent on ensuring that former Vice President Biden wins– that he has promoted since Election Day.

“Protect the Vote” and “Stop the Steal” pro-Trump rallies are popping up nationwide, with particular attention being paid to Las Vegas, Detroit, Philadelphia, Phoenix and Atlanta – all cities in states where results are close, or where the Trump campaign is contesting the count.

More than 100 “Protect the Vote” and “Stop the Steal” protests have been held across the country through Friday morning. The very nature of these activities is problematic, calling into question the democratic process and agitating people to the point of action. In fairness, most protests progressed without incident, but some were characterized by violent clashes with police and multiple arrests. The National Guard was called into Portland after reports of “widespread violence” there, including reports that police confiscated a loaded AR-15-style weapon with a sticker associated with the Boogaloo Movement. More than 50 arrests and multiple weapons confiscations were reported in New York.

These rallies are being organized by non-extremist groups but have been amplified by online extremist channels and individual extremists. Some extremists may show up at these events; a Proud Boy and a Neo-Nazi were allegedly spotted at a Philadelphia protest. QAnon gear reportedly was seen at a protest in Harrisburg, Pennsylvania.

On Facebook, support for the “Stop the Steal” campaign has grown rapidly among mainstream Trump supporters. One “Stop the Steal” Facebook group, which included posts promoting disinformation and violence, reportedly gained more than 300,000 members between Wednesday and Thursday, when Facebook finally shut it down. While the group was still live, members were invited to join a similar group on MeWe, which is marketed as a private alternative to Facebook.

Extremists across less mainstream social media platforms, including Parler, Telegram and militia forums, continue to promote the false “Democratic election theft” narrative. Many have endorsed the idea that violence and civil war are a reasonable and necessary response. Some are celebrating this moment as a victory for accelerationism because “faith in the system has been shattered.” Again, the potential violence is terrifyingly high and such charges only increase the odds.

Across militia message boards, the focus has intensified around conspiracies about voting totals. As of Thursday, members were not discussing plans to organize or attend protests, and there was no notable discussion of the need for a violent response. It is possible this attitude may shift if Biden is declared the winner.

Meanwhile, QAnon believers echoed fears that Democrats would perpetrate massive voter fraud to steal the election. Conspiracy theorist Alex Jones urged followers to “stake out polling places” He says, “We need people to stake out these key polling places and key areas and follow folks around. This is coming down to just us doing it.” On Thursday night, Jones showed up at a pro-Trump protest in Maricopa county, where he made wild, unsubstantiated claims of Democrats of stealing the election, and echoed common antisemitic conspiracies, saying Trump’s eventual victory would be a defeat for “globalists” and “George Soros.”

Trump ally and former White House adviser Sebastian Gorka appeared to advocate violence in response to Democrats’ alleged fraud, telling listeners of his November 5 “America First” radio show, “We need the judges to enforce the rule of law, and if the local bureaucrats prevent us from seeing the evidence, from seeing the legitimate votes, we need the U.S. Marshals to deploy and they need to break down the doors of those polling stations and stop the crimes being committed. It is that simple.” Gorka added, “Now, now, now, get out on the streets, protest and show them who you are and that they can’t get away with it.”

Late Thursday, Donald Trump, Jr., appeared to urge “total war” over the election results, tweeting: “The best thing for America’s future is for Donald Trump to go to total war over this election to expose all of the fraud, cheating, dead/no longer in state voters, that has been going on for far too long.” Thankfully Twitter blocked the post. Once again, the shattering of norms and invocations to violence coming from a member of the First Family has no precedent and appears to cross a threshhold.

While threats of violence have not yet manifested in widespread action, this post on the “Proud Boys Uncensored” Telegram channel underscores a willingness to take up arms on President Trump’s behalf: 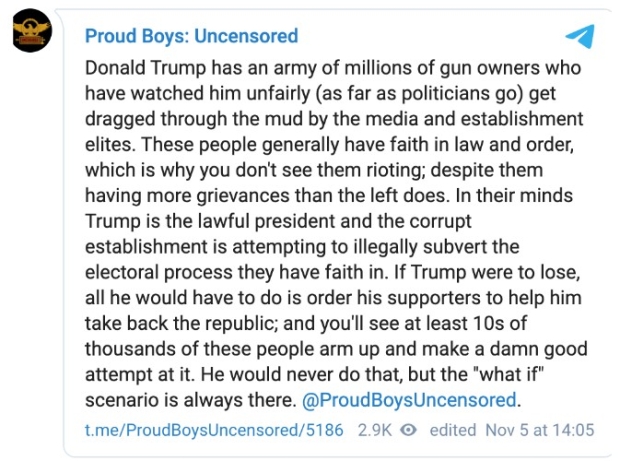 Later that day, the same Proud Boys channel also posted this, which may be a reference to Donald Trump, Jr’s Thursday tweet, detailed above.

Across the country, anti-Trump protestors also continue to organize, issuing calls to “mobilize if Trump undermines the results of the election.” Extremists are watching these appeals closely and have discussed confronting protesters at the events.

In summary, public figures are pushing baseless conspiracies, using militant rhetoric and advocating conspiracies that already have traction with extremists. We are in a red zone without precedent. The stakes have never been higher.

In this moment, it is incumbent for elected officials, particularly members of the GOP, to call for calm; for law enforcement authorities at all levels to monitor these threats with utmost vigilance and for social media services to remove any content that suggests violence of any form.