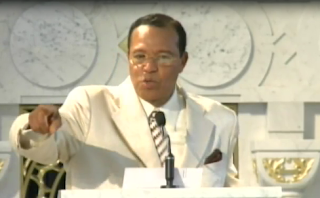 Nation of Islam (NOI) leader Louis Farrakhan used his platform at the NOI’s Mosque Maryam in Chicago on Sunday to lead his audience in an anti-Semitic tirade.

Towards the end of his remarks, Farrakhan made a bizarre comparison between the study of ants and white people. “The Honorable Elijah Muhammad says to study [white people]. They’re successful. They make no excuses for their failures. They work hard in a collective manner like the ant….Their long coevolution with other species has led to mimetic, commensal, parasitic, and mutualistic relationships.”

He then brought Jews into the comparison:

Go back to the Secret Relationship[Between Black and Jews] …White people are wise and the wisest of white people are the members of the Jewish community…They are wise and they are the guards of their own world. Are you mad with me for saying that? [Audience: “No sir!”] You can’t go nowhere in their world without paying obeisance to them.

Farrakhan then engaged in a disturbing call-and-response with his audience:

Anti-Semitism in the US
Blog

Anti-Semitism in the US
Extremism, Terrorism & Bigotry
Hate Crimes
reports