ADL volunteer leaders from across the country came together to lobby and advocate around countering hate. They learned from and were inspired by subject matter experts, Members of Congress, civil rights activists, journalists and authors during the keynote plenary speeches and panels. 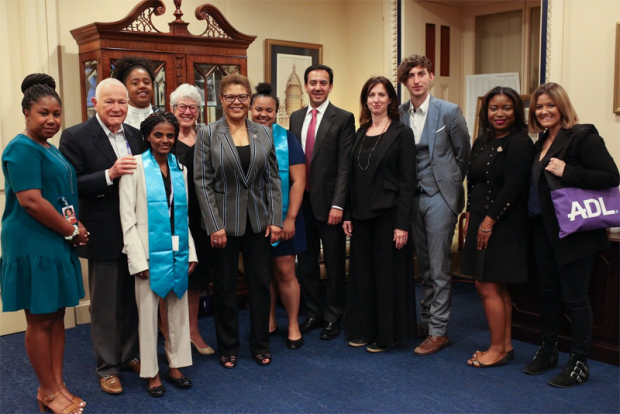 Everyone sitting in the Independence Ballroom at the Grand Hyatt in Washington, D.C. on June 2nd received a sobering reminder of the power of partnership when it comes to healing after tragedy. During the opening keynote panel, Tammy Gillies, ADL’s San Diego Regional Director, shared with the participants at NLS that it was Undersheriff Michael Barnett of San Diego County Sheriff’s Department who first told her about the shooting at the Chabad of Poway synagogue.

Gillies said ADL immediately made sure law enforcement was at every synagogue in the area.

“The partnership with ADL was a benefit to us and the community at large, and not exclusive to the Jewish community,” Barnett said from the stage.

Gillies fielded calls from San Diego police chiefs that day and, soon after hearing the news, went to the command center where she met with them and members of the FBI. She had been working with them for years.

Pesner said when he saw the photos of the vigil ADL San Diego arranged, he noticed that people of many races and in clothes representing their different faiths came together. “Hope is not a Jewish concept. Hope is a human concept,” he said. 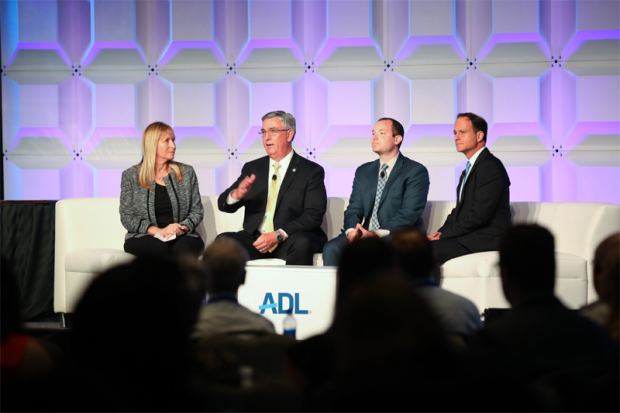 The behavior on various social media platforms generated by the white supremacists behind the shootings at Poway, Pittsburgh and New Zealand was the subject of the next panel. In conversation with ADL’s Director of the Center on Extremism, Oren Segal, Joel Finkelstein, Founder of the Network Contagion Research Institute, spoke about the data he has used to track trends and to look at the language extremists are using on various social media platforms.

“They are propagandizing all sorts of hate and it’s starting to work,” Finkelstein warned.

While this may foster online networks across the globe among people who may never have met in person, there are certain trends arising unique to certain countries that in some ways could serve as prophecy.

Marie van der Zyl, President of the Board of Deputies of British Jews, shared her observations of anti-Semitism in Britain. Van der Zyl spoke about the Labour Party and the anti-Semitic rhetoric of Labour leader Jeremy Corbyn.

Van der Zyl spoke about the rise of anti-Semitism within British politics, observing that “anti-Semitism is not just a problem for Jews, but for the wider society and the world.”

Tensions between political parties is not unique to Britain, and Amy Chua, John M. Duff Professor of Law at Yale Law School and author of Political Tribes: Group Instinct and the Fate of Nations, addressed the polarization within the U.S. and the political tribalism that plagues the country.

Chua explained that humans have a primal urge to belong to groups, but that group identity can then become interwoven with self-identity. The problem, she said, becomes when this sense of tribalism overtakes a political system because then people attribute negative characteristics to the opposing side.

“When you feel a threat, that’s when you retreat to tribalism,” Chua said. 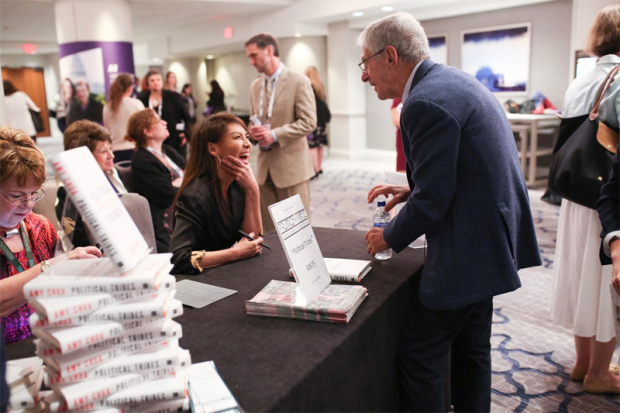 During the evening plenary, Ken Hersh, President and CEO of the George W. Bush Presidential Center, also spoke about tribalism and emphasized the need for “principled leadership” as a means to counter it.

In addition, Hersh talked about the clashes between what he defined as the fast and slow worlds. The former values speed, and the tools of technology such as artificial intelligence and robotics while the later prizes accuracy over pace, coalitions and multi-party agreements.

Holly Kuzmich, Executive Director of the George W. Bush Presidential Center, led a conversation immediately following Hersh’s remarks, with Michael Gerson, author and op-Ed columnist of the Washington Post. She asked Gerson what makes him hopeful about the U.S.

He responded by citing the decency of human character and the ability of certain institutions in civil society to humanize people. He said he remembers after the shooting at the Emanuel African Methodist Episcopal Church in Charleston, South Carolina, that some of the families of the deceased said they forgave the perpetrator.  Gerson said that this was a “moment of grace,” and incredibly powerful.

New York Times Opinion Editor and Writer, Bari Weiss became a Bat-Mitzvah at Tree of Life Synagogue in Pittsburgh. In a conversation with Emma Green, Staff Writer at The Atlantic, during the June 3rd morning plenary, Weiss spoke about the attack on what she referred to as her community.

“It often comes cloaked in the language that is familiar to our own tongues, the language that we want to identify with, the language of anti-racism, of social justice, of all these things that sound really good. But when social justice comes in the form of believing that only one state in the world does not deserve a right to exist, then you have to sort of wonder what kind of justice that really is,” she said.

The program continued with renowned author, Yossi Klein Halevi, who, during his remarks on the state of the Jewish state presented his view of the new coalescence of Israel’s political center and their approach to the issues of the day. He explained that the center views the two-state solution to the Israeli-Palestinian conflict as both a necessity and a concerning prospect, and that most Israelis agree the current climate is not ripe for negotiations. The center is also concerned with Israel's future as a Jewish and democratic state, specifically on challenges relating to problematic legislation, like the Nation State Law, and the attacks on the Supreme Court by senior Israeli leaders. While a two-state solution is currently not within reach, Klein Halevi spoke of the importance of keeping the path towards this goal viable.  The issue of Israel annexing parts of the West Bank, which Prime Minister Netanyahu publicly supported, is seen as a grave challenge to two-state solution.

Klein Halevi also spoke about Prime Minister Netanyahu's failure to form a government, and attributed the decision to hold new elections to the growing divide within Israeli society between the Ultra-Orthodox/Haredi community and the rest of the country. In terms of the divide between the US Jewish community and Israel, Klein Halevi explained there are differences between the worldview of each community, including how each perceives threats against them.

Elan Carr, Special Envoy for Monitoring and Combatting Anti-Semitism, opened the afternoon plenary by describing the impact of participating in the March of the Living program. He traveled with students and faith leaders, among others, to Poland “to bear witness” and “to say, Never Again,” and then to Israel where at the Kotel they stood together once more, but this time in celebration of life.

During his remarks, Carr spoke about what he refers to as the fastest growing type of anti-Semitism, “the anti-Semitism that clothes itself in the language of anti-Zionism and Israel hatred.” He says that it is found in Western Europe and on U.S. college campus and elsewhere. 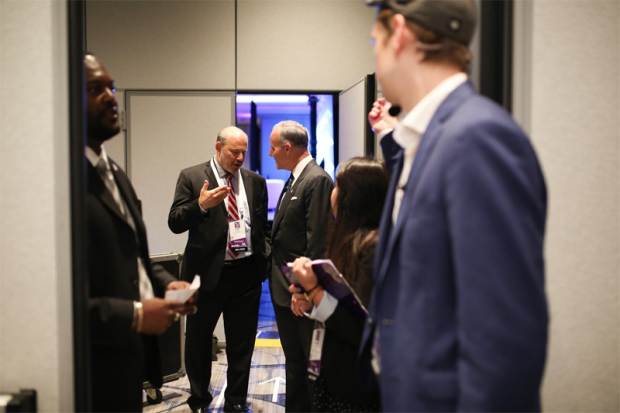 Following Carr, Chief Art Acevedo of the Houston Police Department, received the William and Naomi Gorowitz Institute Award, presented to law enforcement leaders for invaluable contributions to safeguarding the country and securing fair treatment for all. Chief Acevedo said at a time when people are being targeted for their religion, race and sexual orientation, and vilified for country of birth, “[he] is proud to say that this chief and this generation of police leaders, history will show, that … it is right to stand up against hate.”

Congressman Steny Hoyer (D-MD), House Majority Leader, talked about the many roots of hate, including anti-Semitism, racism and transphobia. He was a member of Congress when the Matthew Shepherd and James Byrd, Jr., Hate Crimes Prevention Act of 2009 was brought to the floor.

“This is America. Hate is not welcome.”

When fighting hate, Vanita Gupta, President and CEO of the Leadership Conference on Civil and Human Rights, spoke about the strength of coalitions.

She said that civil rights work is larger than any one individual or organization and it’s not a fight that can be done alone.

Shortly after Gupta left the stage, on screen was a clip of the 2009 celebration following the signing of the Matthew Shepard and James Byrd, Jr., Hate Crimes Prevention Act. Today, ADL recognized the 10th anniversary of the passage of this legislation with a discussion among Louvan Harris, sister of James Byrd, Jr. and Judy and Dennis Shepard, parents of Matt Shepard. They lost family members to crimes motivated by hate and had the courage to tell the stories of their loved ones over and over.

Moderator Michael Lieberman, ADL Washington Counsel, explained that for 13 years, a coalition of 150 groups lobbied for the passage of federal legislation – along with participants, year after year, of this conference.

Mr. Shepard said that once the name of the proposed legislation included the names of his son and Byrd, people began thinking about it differently. “There was a face to the act,” he said.

Last fall, there was a public remembrance for Matthew at Washington National Cathedral where his ashes were interred. The Cathedral was full of people there to support the family. 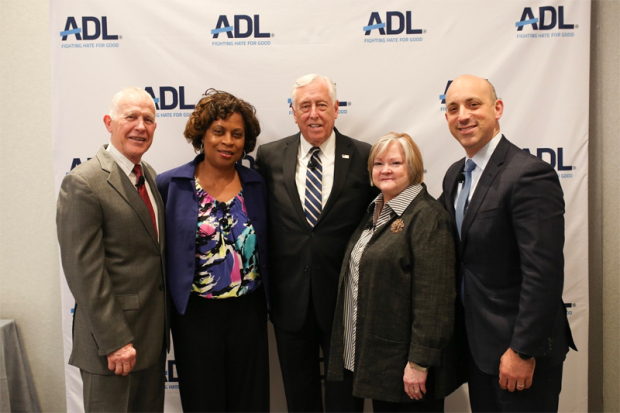 Senator Cornyn said that a point made on Memorial Day by former deputy Secretary of Defense Gordon England stuck with him.  While the “charged rhetoric, division and loud voices” across the country can be frustrating and sometimes offensive, it is still an example of Americans’ freedom to voice their opinions. A right that is not guaranteed in other countries.

“We have a duty to speak up, to respond, to defend our values…,” Senator Cornyn said.

“In the midst of division and hatred, we need voices like yours to promote inclusiveness and equality.” 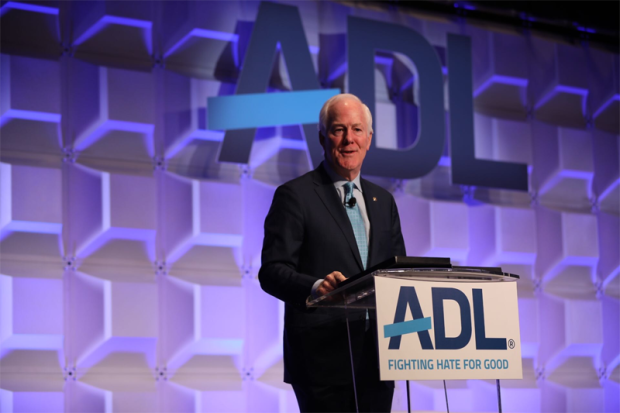 Senator Rosen also spoke about the hatred she has observed, and said that we need to call out anti-Semitism and bigotry whether it comes from the left, right or center.

When referring to the fight for DREAMERS and keeping families together at the border, she reminded people that, “we too were strangers once at this border.”

“In great darkness it is all the more important that we band together as a community,” she added. 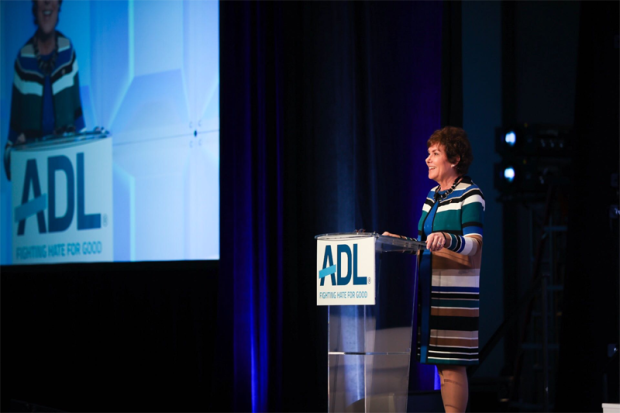 Senator Charles E. Schumer (D-NY), Senate Minority Leader, who had addressed past ADL conferences, said at this year’s closing plenary that this was his first time doing so as a grandfather. He said that he wonders now what state of the world will be left to his grandson and the generation following. He said that anti-Semitism had been on a decline, but not any longer.

He cited the rise of anti-Semitism in his hometown of Brooklyn. “Whether on the streets of Brooklyn or Berlin, Jews should not feel afraid to wear a kippah,” he said. 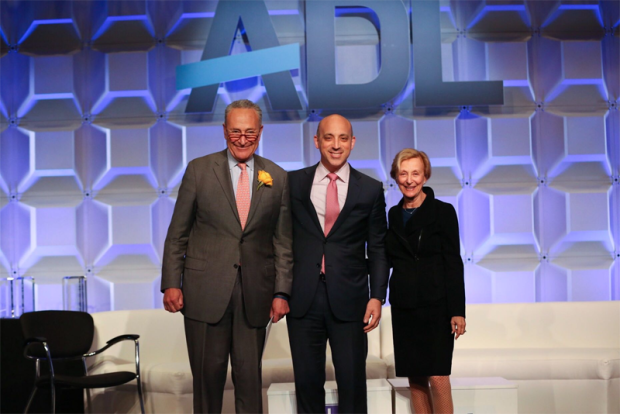 Representative Hakeem Jeffries (D-NY), Chairman of the House Democratic Caucus, also spoke about his home district which he describes as one of the most diverse in the country with people from all over the world, many with the goal of pursuing the American Dream.

“We are a nation of immigrants. Our diversity is our strength, not our weakness,” he said. 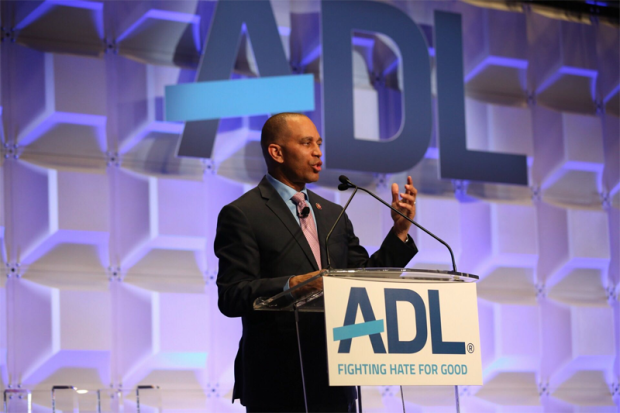 The plenary concluded with a panel moderated by Eileen Hershenov, ADL’s SVP of Policy, and some members of the House of Representatives’ Bipartisan Task Force for Combating Anti-Semitism who spoke about the importance of fighting anti-Semitism, but also doing so with bipartisan support.