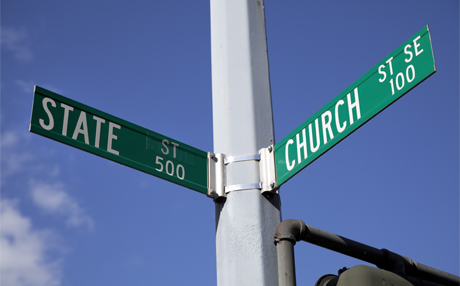 Fourth Circuit Gets It Right on Legislative Prayer

In a recent decision, the full U.S. Court of Appeals for the Fourth Circuit (en banc) ruled that the Rowan County Board of Commissioners’ practice of exclusively opening public meetings with Christian prayer is unconstitutional. The 10-5 decision rejected a 3-judge panel decision of the Fourth Circuit upholding the practice. ADL had joined a friend-of-the-court (amicus) brief to the Court arguing that the Board’s invocation practice was unconstitutional.

According to the Court, for years on end the Rowan County, NC Board of Commissioners

… composed and delivered pointedly sectarian invocations. They rotated the prayer opportunity amongst themselves; no one else was permitted to offer an invocation. The prayers referenced one and only one faith and veered from time to time into overt proselytization. Before each invocation, attendees were requested to rise and often asked to pray with the commissioners.

The Court noted that 97% of the opening prayers at public meetings were overtly Christian in nature and no other religion was represented. Indeed, some prayers suggested that Christianity was superior to other faiths and, on occasion, Board members implored meeting attendees to accept Christianity.

In Town of Greece v. Galloway, the Supreme Court ruled for the first time that local legislative bodies can open meetings with sectarian prayers. It, however, placed two limitations on this rule. First, the local legislative body must have a non-discrimination policy as to prayer givers. That means a public official, clergy member or community member cannot be denied the opportunity to give the opening prayer or invocation based on his or her faith tradition, including minority religious beliefs or atheism. And second, the practice cannot result in a “pattern of prayers that over time denigrate, proselytize, or betray impermissible government purpose.”

Applying this standard to the Board’s opening prayer practice the Fourth Circuit found that the Supreme Court “… has never approved anything like what has transpired here or anything resembling the dissents’ invitation to local government to work sectarian practices into public meetings in whatever manner it wishes.” It specifically determined that:

The prayer practice served to identify the government with Christianity and risked conveying to citizens of minority faiths a message of exclusion. And because the commissioners were the exclusive prayer-givers, Rowan County’s invocation practice falls well outside the more inclusive, minister-oriented practice of legislative prayer described in Town of Greece. Indeed, if elected representatives invite their constituents to participate in prayers invoking a single faith for meeting upon meeting, year after year, it is difficult to imagine constitutional limits to sectarian prayer practice.

In concluding that the Board’s opening prayer practice violated the Constitution, the Fourth Circuit strongly stated:

The Establishment Clause does not permit a seat of government to wrap itself in a single faith. But here elected officials took up a ministerial function and led the political community in prayers that communicated exclusivity, leaving members of minority faiths unwilling participants or discomforted observers to the sectarian exercises of a religion to which they did not subscribe. The solemn invocation of a single faith in so many meetings over so many years distanced adherents of other faiths from that representative government which affects the lives of all citizens and which Americans of every spiritual persuasion have every right to call their own. If the prayer practice here were to pass constitutional muster, we would be hardpressed to identify any constitutional limitations on legislative prayer.

ADL believes that legislative prayer – whether sectarian or non-sectarian – is inappropriate because it can be divisive and convey a message of exclusion to community members of other faiths or non-believers. Although Town of Greece v. Galloway is the law of the land, the Fourth Circuit decision adds some important and helpful limits to the interpretation of this Supreme Court standard.