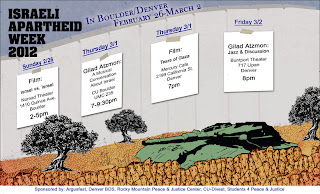 Gilad Atzmon, an anti-Semitic author, writer and musician based in London, is scheduled to make two speaking appearances as part of Israeli Apartheid Week in Colorado.
Atzmon is scheduled to speak at the University of Colorado in Boulder on March 1 during an event titled “A Musical Conversation about Israel.” The event, which will include a discussion of “Jewish Identity Politics and the Oppression of Palestine,” is being sponsored by Students 4 Peace and Justice and CU-Divest. On March 2, he is scheduled to speak at the Buntport Theater in Denver.
Past “Israeli Apartheid Week" events have been marked by extreme anti-Israel rhetoric, including accusations of Israeli racism and apartheid, and calls for boycotts and divestment actions against Israel.
For over a decade, Atzmon’s writings have employed traditional anti-Semitic stereotypes while demonizing Israel, Zionism and Jewish culture and identity. He is an outspoken and prolific promoter of classic anti-Semitic conspiracy theories about Jewish control over American foreign policy, and has written that Jews have a plan for world domination. He has trafficked in anti-Semitic canards such as the notion that Jews are responsible for the death of Jesus.
Anti-Semitism Globally
Anti-Semitism in the US
Previous Blog
American Muslims for…
Next Blog
Thousands Expected to Attend…

ADL called on the governments of Egypt and Oman to remove virulently anti-Semitic titles for sale at state-run book fairs in Cairo and Muscat.
Anti-Semitism Globally