Anti-Defamation League
Antisemitism in the US
With the arrival of warmer weather, Occupy Wall Street protests around the country have begun to pick up in recent weeks. While reports of rampant anti-Semitism at last summer’s protests were overblown, two isolated incidents this week indicate that anti-Semites continue to take advantage of the Occupy movement and use it as a convenient platform to air their views.
On Monday, an African-American individual attending an Occupy protest in Washington, D.C. made several anti-Semitic comments, including loudly remarking that Jewish people “try to get ahead of Black people, like they’re better than us.”
The individual claimed to be part of a group called the United Occupy Movement. A description of the group on its Web site reads, “We are the young, old, male & female, no-D and Ph.D., Christian, Muslim, Aethiest [sic] and ethnically diverse who should have a greater voice according to our Constitution.” 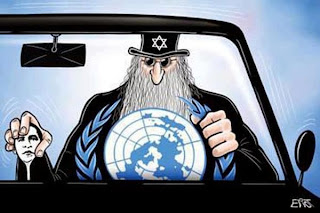 And just yesterday, a harshly anti-Semitic cartoon was posted to a Facebook page that claims to be the “Community Page” for Occupy Tampa. The cartoon featured a picture of a stereotypical-looking observant Jew driving a car while holding President Obama’s head in one hand and a steering wheel in the other fashioned out of the United Nations’ logo. The image evokes classic anti-Semitic myths of Jewish control, in this case of the U.S. government and the UN. Administrators of the page have since apologized for the posting, saying they’ve had “some intrusion issues” but that the administrator who posted the image has now been banned from the page.

The very same cartoon appeared in Al Watan, a Qatar-based newspaper, on September 30, 2011 at the height of Palestinian efforts to unilaterally declare statehood at the UN. The cartoon is the work of an artist named Eliot whose anti-Semitic and anti-Israel cartoons are regularly published in Al Watan.

ADL reported on a variety of anti-Semitic and anti-Israel incidents that took place at Occupy protests last summer and fall. These incidents consistently appear to be the acts of individuals seeking to exploit the popular social protest movement and inject it with their own hateful views.

Antisemitism in the US
Previous Blog
LaRouche Supporters Employ…
Next Blog
Does Jimmy Carter Endorse BDS?

Antisemitism in the US
Bigotry
Extremism
reports

Anti-Israel Activity & BDS
Antisemitism in the US
Article