On Tuesday, Iranian Supreme Leader Ayatollah Khamenei delivered the opening address at the annual Sixth International Conference in Support of the Palestinian Intifada (uprising), being held from February 21-23 in Tehran. The Iranian leader’s speech, an anti-Semitic, violence-laden diatribe against Israel, was consistent with the regime’s ongoing belligerence towards the Jewish State and its allies like the United States.

The speech was rife with anti-Semitic proclamations of a “Zionist” plot to sow instability across the Middle East, hate-filled statements about Israel being a “cancerous tumor”, and support for Palestinian violence to fight Israel’s existence. 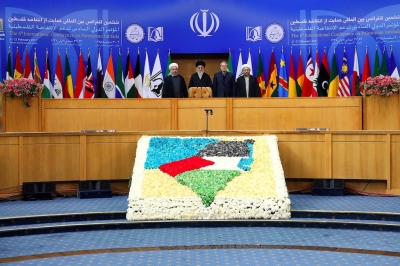 The Conference was reportedly attended by delegates from 80 countries, a representative of the Jewish anti-Zionist Netueri Karta group, and leaders of the Islamic Jihad, Hamas and Hezbollah terror organizations. The Secretary General of the Islamic Jihad, Ramenzan Abdullah, reportedly used his speech to call for Israel’s downfall and deny the historic Jewish connection to Israel by claiming that “Palestine belongs to the Palestinians, not the Jews.”

The following are select excerpts from Khamenei’s speech:

Those who created the Zionist regime in the region with the purpose of hampering the stability, solidity and progress of the region through imposing a long-term conflict are behind the seditions that exist in the present time as well. These are seditions that have culminated in the capabilities of regional nations being used to foil one another because of engagement in futile and meaningless conflicts.

When all these capabilities are ruined, the ground will be prepared for strengthening the usurping Zionist regime on a daily basis. Amid all these, we are witness to the endeavors of well-intentioned and wise personalities in the Islamic Ummah. They are diligently trying to resolve these differences. But unfortunately, the complicated plots of the enemy have managed to impose civil wars on nations by benefiting from the negligence of some governments. These plots have managed to pit nations against one another and to counter the effect of the endeavors that well-intentioned personalities in the Islamic Ummah have made…

From the beginning, this cancerous tumor has been developing in several phases until it turned into the current disaster. The cure for this tumor should be developed in phases as well. Until today, several intifadas and a constant and continuous resistance have managed to achieve very important phased goals. The Palestinian intifada continues to gallop forward in a thunderous manner so that it can achieve its other goals until the complete liberation of Palestine…

The dangers originating from the presence of the Zionist regime should never be ignored! Therefore, the Resistance should benefit from all the necessary tools for continuing its duty. On this path, all regional nations and governments and all freedom seekers in the world should meet the main needs of this resistant nation. The main pivot of the Resistance is the steadfastness and endurance of the Palestinian people who have raised courageous and resistant children. Meeting the needs of the Palestinian people and Palestinian resistance is an important and vital responsibility which should be carried out by all of us.

The full speech can be found here.