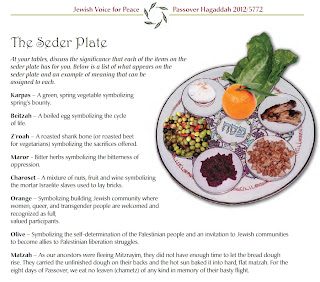 As Jews around the world prepare to celebrate Passover this Friday night, one Jewish organization has opted to use the holiday as an opportunity to promote an anti-Israel agenda.

Jewish Voice for Peace, a Jewish anti-Zionist organization, recently published an alternative Hagaddah that compares the Jewish people’s exodus from Egypt to the Israeli-Palestinian conflict, replete with asserting that the third of the four cups of wine represents the Boycott, Divestment and Sanctions (BDS) campaign against Israel, the Ten Plagues represent the “Ten Plagues of Israeli Occupation” and that the maror (bitter herbs) represents the “bitterness of life under occupation.”

While some elements of the alternative text focus on social justice and progressive causes (and includes texts and poems from some of the moral leaders of our time), much of the Hagaddah tries to exploit the text to advance anti-Israel initiatives. The introduction, for example, compares Moses’s famous declaration to Pharoah, “Let My People Go!” to the efforts of the Gaza Flotilla to “free” the Palestinian people by breaking Israel’s blockade of Gaza.

According to JVP, the third cup of wine, which is traditionally consumed after the meal portion of the Seder, represents BDS and Seder participants are encouraged to “make a L’Chayim” to BDS.

The constant supremacy of the Palestinian cause is also startling. When the text, for example, reaches Yachatz, the breaking of the middle matzah, the text reminds participants to acknowledge the “break that occurred in Palestinian life and culture with the establishment of the State of Israel in 1948.”

JVP had trouble inserting two additional core parts of its agenda into the Hagaddah text and instead included them as “Addendums” at the end. The first is a letter about “pinkwashing,” which details a recent success by anti-Israel activists in Seattle to cancel an event with Israeli LGBT people. The second is a letter signed by JVP’s Rabbinical Council opposing a war against Iran.