New AG Jeff Sessions: Promises Made, Promises to be Kept on Civil Rights and Equality 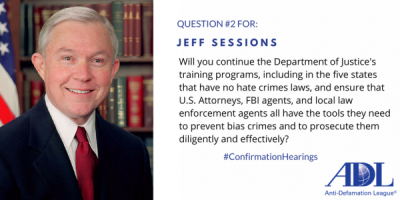 As we have done with many other Cabinet nominees over the years, most recently Betsy DeVos, ADL had sent a letter to Senators on the Senate Judiciary Committee to urge members to ask nominee Jeff Sessions questions on a range of topics at his confirmation hearings. The ADL letter drew on the League’s broad expertise in hate crime prevention, promotion of voting rights, support for women’s reproductive rights, fighting for LGBT equality, and dedication to fair immigration policies.

Committee members did ask a number of questions on these topics. Here are responses provided by Attorney General Sessions. We and our coalition partners will work to ensure that the new Attorney General’s commitments are kept:

“I agree…that attacks motivated out of prejudice have no place in our society.”

“If I am confirmed as Attorney General, I will enforce all civil rights law to combat discrimination against all Americans, including American Muslims.

“If I am fortunate enough to be confirmed as Attorney General, my duty will be the pursuit of equal enforcement of the law for all Americans. From time to time, this duty may necessitate federal involvement in a state where federal law is not being followed or where equal justice under the law is not being administered.”

“While as Senators we may have disagreed about the most effective ways to address the challenges facing our country, my duty as Attorney General, if I am fortunate enough to be confirmed, would be to enforce the laws passed by Congress. I would approach enforcement of [the Matthew Shepard and James Byrd, Jr.  Hate Crimes Prevention Act] the same way that I would any other federal law—I would endeavor to direct and utilize the resources of the Department in the most effective manner possible to ensure full enforcement of federal laws and the protections inherent in them. And I will work with our law enforcement professionals to tailor our efforts to ensure the safety of all of our communities.”

“…[G]overnment cannot create laws designed to improperly inhibit the right of any eligible citizens to vote. The voting rights of Americans are protected by federal law, including the Voting Rights Act.”

“If I am confirmed as Attorney General, I am committed to enforcing all of the federal laws within the Department’s jurisdiction, and particularly the laws regarding voting, in a fair and even-handed manner.”

“If I am fortunate enough to be confirmed as Attorney General, I will take no enforcement actions that are unauthorized by federal law. Individuals who seek abortions and abortion providers who comply with federal laws should not be subject to prosecution or criminal punishment.”

“If I am fortunate enough to be confirmed as Attorney General, my personal convictions on the issue of abortion—which are well known—would not hinder me in my duty to faithfully enforce federal law and adhere to Supreme Court precedent on this issue.”

“These [abortion] providers are entitled to the protection of relevant federal law. If I am fortunate enough to be confirmed as Attorney General, I will faithfully follow and enforce the law as defined by the courts, including the FACE Act and all other federal laws that the Attorney General is authorized to enforce.”

“I firmly believe that all Americans are entitled to equal protection under the law, no matter their background.”

“I believe the United States should have a lawful system of immigration that is fair and objective and gives people from all over the world the right to apply for admission in order to prosper and to improve their lives and our country.”

The Attorney General and the Department of Justice have an essential role to play in the support and enforcement of civil rights and equality for all Americans. We will continue to work tirelessly to ensure that all Americans, no matter their race, religion, ethnicity, gender, gender identity, sexual orientation, or national origin, have access to the full and equal protection of the laws.