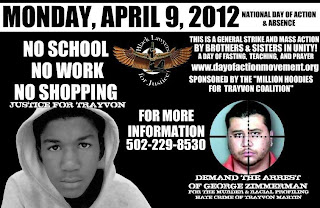 The New Black Panther Party (NBPP), which offered a $10,000 reward for the “capture” of George Zimmerman, the man who shot and killed an African-American teenager Trayvon Martin last month, is planning additional activity in Florida.

The largest organized anti-Semitic and racist black militant group in America, the NBPP released a flyer on its website with a photo of Zimmerman’s face in the crosshairs. The flyer promotes a “National Day of Action and Absence” on April 9, calling for “a general strike and mass action by brothers and sisters in unity.”

In a radio interview with the syndicated radio program The Muslim Street, Malik Zulu Shabazz, NBPP National Chairman, said his group is also planning a “county-wide and state-wide defense training and community patrols to protest against racial violence and attacks” in Sanford prior to the day of action.

The events are being organized under the banner of Black Lawyers for Justice (BLJ), Shabazz’s legal advocacy group. Like the NBPP, BLJ combines bigotry with militant messages of Black Nationalism under the guise of championing civil rights and promoting black pride and consciousness. 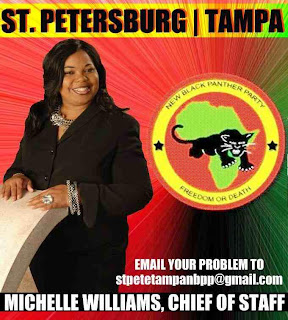 The NBPP’s Tampa chapter Chief of Staff, Michelle Williams, spoke on the group’s web radio program on April 2. “I am for violence if non-violence means we continue to postpose a solution to the American Black man’s problem just to avoid violence,” she said.

On the same radio program, Mikhail Muhammad, the NBPP’s Florida representative, said the group has 20 new recruits in the city of Sanford. Muhamamd previously told CNN, “I don’t obey the white man’s law, I don’t follow the American law…we decided to craft language to put pressure on the united snakes, - because these are snakes, government – to arrest him because when the people find him, he may not be alive.”

The ADL survey found that nearly one-in-five Americans (19 percent) believe “Jews still talk too much about what happened to them in the Holocaust.
Anti-Semitism in the US
Article

White supremacist propaganda distribution more than doubled in 2019 over the previous year.
Anti-Semitism in the US
Extremism, Terrorism & Bigotry