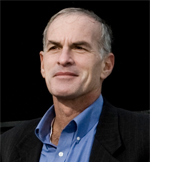 Norman G. Finkelstein, an anti-Israel academic whose career has been marked by a vitriolic hatred of Zionism and Israel, is scheduled to be the “Special Guest Speaker” at the 10th anniversary celebration of KinderUSA, an organization whose stated mission is to “alleviate the suffering of children and their families in Palestine and beyond.”

The May 5 event in Long Beach, billed as: “A Decade of Giving,” is endorsed by the Los Angeles-based Muslim Public Affairs Council (MPAC). In a press release for the event, MPAC’s Senior Advisor Dr. Maher Hathout said, “I think everyone who comes will walk out informed and inspired as well…you will listen to perspectives that you will not hear on CNN or the official media that is always giving us our narrative. It's about time to hear the narrative coming from ourselves to ourselves.”

Finkelstein, who is frequently invited to speak on campus about the Israeli-Palestinian conflict, has a long history of portraying Holocaust education and survivor compensation as a calculated attempt to "immunize Israel from criticism" for alleged human rights abuses.

He frequently evokes offensive comparisons between Israel and Nazi Germany. On his website in 2009, for example, he re-posted a collection of images of Jewish persecution in Nazi Germany juxtaposed with images of Palestinian suffering. The title of the Web page is “The grandchildren of Holocaust survivors from World War II are doing to the Palestinians exactly what was done to them by Nazi Germany…”

Finkelstein has also expressed support for the terrorist organizations Hamas and Hezbollah. In an interview with a Lebanese television station in January 2008, Finkelstein said, “I was of course happy to meet the Hezbollah people, because it is a point of view that is rarely heard in the United States. I have no problem saying that I do want to express solidarity with them, and I am not going to be a coward or a hypocrite about it.”

At a speaking appearance at the University of Denver in September 2011, Finkelstein attempted to legitimize Hamas by comparing the group to Gandhi: “Gandhi's solution is the same as Hamas, word-for-word.”

Previous Blog
Does Jimmy Carter Endorse BDS?
Next Blog
Divestment Effort at the…

Antisemitism in the US
Cyberhate
Press Release

The CSS and ADL forged a new partnership centered around improving Jewish community safety through intelligence gathering, information sharing and security training for Jewish volunteers.
Antisemitism in the US
Community Security
Children's Literature