Anti-Defamation League
Antisemitism Globally
Press TV, Iran’s English-language propaganda television station, marked the 45th anniversary of the sinking of the USS Liberty by interviewing anti-Israel and anti-Semitic activists Alison Weir, Michael Santomauro, and J. Bruce Campbell.
During the interview, which was held on June 8, the trio accused Israel of purposefully targeting the U.S. warship during the height of the 1967 Six-Day War. (The circumstances surrounding the U.S.S. Liberty, an American ship that was unintentionally fired on by Israeli forces, has been regular fodder for anti-Israel conspiracy theorists.) The interview also included several anti-Semitic statements and conspiratorial accusations of Jewish control over the U.S. government. 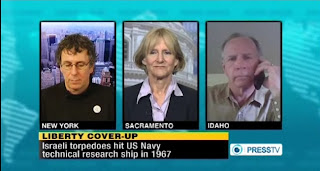 Michael Santomauro, an anti-Israel blogger and Holocaust denier, alleged that the USS Liberty is a cover-up maintained by U.S.-based Jewish support for Israel and the disproportionate influence Jews hold over the U.S. government. Jewish interest groups, whom Santomauro claimed provide over the overwhelming amount of funding to U.S. political parties, wield their power through what he termed “Jewish PAC money.”
J. Bruce Campbell, a contributing writer for the anti-Semitic website, Veterans Today, claimed that the attack on the Liberty was part of a conspiratorial U.S-Israeli plan he called Operation Cyanide, a secret military operation that Campbell alleges purposefully sent the Liberty to get sunk by the Israelis in order to place blame on Egypt. The desired result, Campbell claims, would have been for the U.S. to retaliate against Egypt and to “drop nuclear bombs on Cairo and Alexandria.” Campbell asserted that this was ordered by the U.S. to assist Israel in creating “great [sic] Israel stretching from the Nile to Euphrates rivers.”
When asked by the host whether he agrees that Israel controls the U.S. government, Campbell responded, “I would say the Jews in America [run the United States]. Israel is a euphemism … It is really American Jews who are behind this [the Iraq and Afghanistan wars] just as it was during 1967…” Campbell also claimed that American Jews want to kill “millions of Muslims” and “thousands of Americans. This is what American Jews want, this is what they make happen through Washington D.C.”
Alison Weir, president of the Council for the National Interest (CNI), an anti-Israel organization that opposes U.S. aid to Israel, added to Santomauro’s comment about the pro-Israel lobby and characterized the U.S-Israel relationship as an “extremely unhealthy situation.” Weir also said that large sums of donations from pro-Israel groups are the cause of “tragedy, misery, violence and war after war after war.” Weir’s comments are consistent with her record of using anti-Semitic imagery and portraying Israel and its agents as powerful forces that control American policy through intimidation and deception.
Press TV, which is based in Tehran, is used by the clerical regime to provide a platform for extreme elements and activists to air their views and opinions. Many of Press TV’s U.S.-based guests are frequently invited by the station specifically for their conspiratorial anti-Israel views. Earlier this year, Weir appeared as a guest on the station to discuss the 2012 American Israel Public Affairs Committee (AIPAC) conference, calling the pro-Israel lobby “very dangerous to the world” and “for Americans.”
Antisemitism Globally
Previous Blog
Brutal Racist Skinhead…
Next Blog
Neo-Nazi Bill White Arrested…