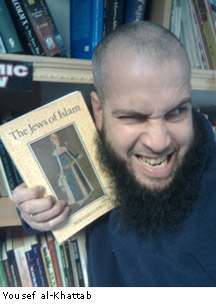 Al-Khattab, who headed Revolution Muslim with Muhammad between 2007 and December 2009, infused the group's activity with his provocative style and virulent hatred of Jews, especially Orthodox Jewry.

In his video, al-Khattab spends much of the time talking about the fine line between free speech and “being a mouthpiece for the mujahedeen,” as well as his relationship and activity with Muhammad during their time with Revolution Muslim. Although he concludes that he never “did break the law,” he expresses his belief that he too will be arrested.

He also defends the statements he has issued online over the years. “I’ll never shut up….everything that I have said when it comes to the issue of Zionists or America’s foreign policy, occupying sovereign territories overseas, I believe that everything I said is true.”

On several occasions, al-Khattab posted online statements that included implicit, if not explicit, threats, particularly against religious Jews. For example, on October 7, 2009, a poem by al-Khattab on the group’s website included language asking God to “kill the Jews.” In the poem, which coincided with the Jewish holiday of Sukkoth, al-Khattab listed ways Jews could be hurt, including by burning "their flammable sukkos while they sleep" and throwing "liquid drain cleaner in their faces."

This pattern of online threats began several years before al-Khattab founded of RM when, in 2002, al-Khattab posted a seemingly threatening note regarding a New York rabbi. He posted the rabbi's photo and home address and wrote: "Please make every effort to reach this man, and help him understand what its like to suffer under lies…Please Ikhwan [Arabic for "brothers"], just make contact with this man."  Al-Khattab later claimed that his home was raided by the police because of a fabricated complaint by this rabbi.

Referring to his 2009 posting on the Revolution Muslim Web site of a picture of Chabad's world headquarters in Brooklyn with a message encouraging readers to “make EVERY attempt to reach these people and teach them the message of Islam or leave them a message from Islam,” al-Khattab admits that he is “the one that posted the things about Crown Heights,” and that he doesn’t view it as “anything illegal and I don’t think that it was a threat…”

He adds, however, that he “would have thought that they [law enforcement] would have considered that a threat much more than what he [Muhammad] did.”