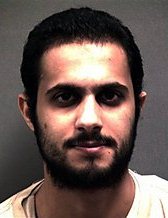 A Saudi national who arrived in the U.S. in 2008 on a student visa has been convicted of attempting to use a weapon of mass destruction in Texas.

Khalid Ali-M Aldawsari, a former chemical engineering student at Texas Tech, was planning to use his skills to build a bomb, according to prosecutors. Although he had not definitively selected a target, Aldawsari allegedly researched of list of targets, including the Dallas home of a former president George W. Bush, nuclear power plants and former soldiers who were stationed at Abu Ghraib prison. Prosecutors also indicated that a college football game was a possible target as well.

Authorities began their investigation into Aldawsari in February 2011 after a chemical supplier in North Carolina reported an unusual purchase made by Aldawsari. He was arrested within a month in Lubbock.

The FBI found chemicals at Aldawsari’s residence along with a journal allegedly indicating that he was inspired by Osama Bin Laden and had been planning to commit a terrorist attack. In one journal entry described by the DOJ, Aldawsari wrote, “…after mastering the English language, learning how to build explosives and continuous planning to target the infidel Americans, it is time for Jihad.”

Aldawsari allegedly created a blog called FromFarAway90, where he wrote in English and Arabic about college life in America, romance, his efforts to maintain his religious identity, and his perceptions of Americans, which included some positive impressions. A few of his posts, however, were more militant, including a March 2010 post in which he wrote “grant me martyrdom for Your sake and make jihad easy for me.”

A month later, he wrote in Arabic, “Muslims can not enjoy a carefree life and peace when in front of them and behind them their lands and dignities are being desecrated with the help of the Arab traitors and other Zionist rulers inside the Muslim world…” His Facebook profile lists “STOP Israel’s War Crimes in Gaza” as one of his interests.

Aldawsari faces a possible life-sentence at a hearing scheduled for October. Anti-Defamation league

Everyone Has a Role in Fighting White Supremacy and Online Hate

Anti-Semitism in the US
Cyberhate
Extremism, Terrorism & Bigotry
Press Release

White supremacist propaganda distribution more than doubled in 2019 over the previous year.
Anti-Semitism in the US
Extremism, Terrorism & Bigotry