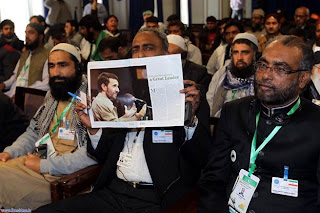 The Asian wing of the Global March to Jerusalem (GMJ) arrived Saturday in Tehran, where a delegation from the convoy met with the president of the Iranian parliament, Ali Larijani, and the Iranian President Mahmoud Ahmadinejad. The Asia GMJ convoy began its journey to Iran in Indonesia on March 10.

According to Iranian news sources, Larijani welcomed the delegation of 120 convoy members and affirmed Iran’s supportive stance towards the Palestinian cause. “We as Iranians, cannot ignore the Palestinian issue,” he said, adding, “The Palestinian people have their legitimate rights; the West and America instead of recognizing these rights are trying to obliterate and ignore them.”

Iran’s controversial nuclear program was among the topics Larijani discussed with the delegation. Accusing “the enemies” of Iran of deliberately generating an international outcry over the program, he asserted, “The U.S. is wrong if it believes that it can still impose its domination over Muslim countries, because Muslims have been awakened and the recent revolutions are an example of this Islamic Awakening.” Larijani also rejected homosexuality as immoral and deviant, charging that “the world is heading towards the end because of them.” Challenging Western criticism of Iran’s human rights record, he added, “[The enemies] accuse us of not taking human rights into account, while they ignore human rights violations committed by their cronies in the [Gulf] region.”

On Sunday, GMJ members held a brief meeting with Ahmadinejad, where he described the GMJ as a “historic movement.”

Anti-Semitism in the US
Extremism, Terrorism & Bigotry
Hate Crimes