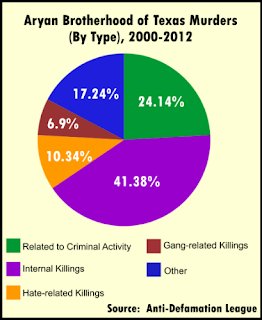 What’s the most violent extremist group in the United States today? The answer may be surprising: it is the Aryan Brotherhood of Texas (ABT), one of the largest white supremacist prison gangs in the country. According to ADL records, since 2000, this racist group—which has no relationship to the older, “original” Aryan Brotherhood—has killed more Americans than any other domestic extremist group.

Since 2000, ABT members and associates have committed at least 29 murders in the United States, all in Texas or neighboring states. The true number is likely considerably higher, as most murders that occur behind prison walls do not get reported by the media. The 29 known killings are all “street” killings, more evidence of the growing presence of racist prison gangs on the streets of America.

Why are there so many ABT murders? There are two main reasons. The first is that the ABT inculcates an acceptance of violence in its members; violence is as often as not the first—or even only—solution to a perceived problem.

The second relates to the nature of racist prison gangs in general and the ABT in particular: the ABT is an organized crime group as well as a white supremacist group. The ABT constitution even acknowledges that it can be a “hindrance” to put ideological beliefs before “business transactions” and that the group has to generate income to further its “mission and growth.” The result is that many ABT murders take place in connection with their “traditional” criminal activities, such as methamphetamine trafficking, home invasions, and identity theft.

Even more ABT murders are actually internal murders, in which gang members kill their own, usually because they believe or suspect the victim has become an informant or broken gang rules, but also sometimes due to factional or other internal fights. It is almost as dangerous to be an ABT member as it is to encounter one.

Ironically, only 3 of the 29 known murders linked to this white supremacist group in the past 12 years were actually hate-related, though there have been other hate-related crimes by ABT members, ranging from assaults to arsons of African-American churches.

There is no doubting, however, the viciousness of the ABT killings, some of which were torture-murders while others were execution-style killings, in which the victim’s body was burned, decapitated or otherwise dismembered in order to make identification difficult.

Top 10 Heartbreaking Moments of Hate in 2021, and How ADL Responded

One Year After the Insurrection: ADL Unveils Interactive Map Highlighting Trends in Hate and Extremism in the Year Since the Attack on U.S. Capitol

ADL’s Center on Extremism has identified eight of the most concerning ways in which extremism and hate have been amplified since the insurrection.
Extremism, Terrorism & Bigotry
reports