The Fight for Reproductive Justice Continues 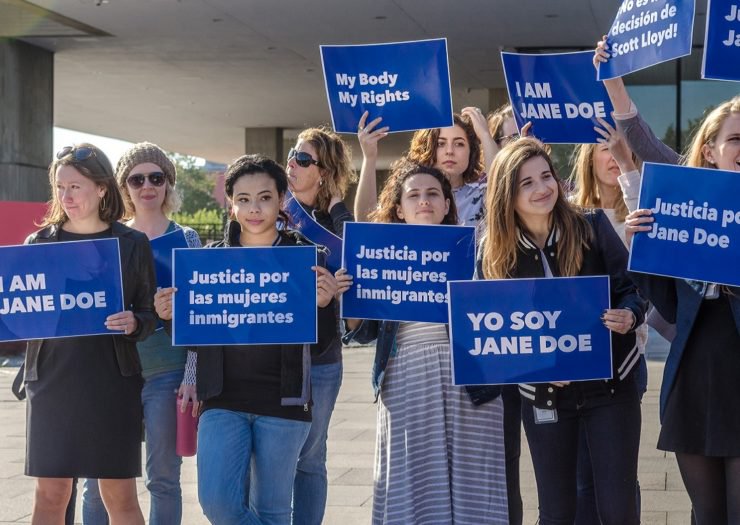 Preventing young immigrant girls in government-funded shelters from accessing abortion care is just the latest effort by the Trump Administration to obstruct the rights of immigrants and the reproductive rights of women in America.

When a 17-year-old immigrant girl, living in a government-funded shelter, needed an abortion last month, the government refused to let her leave the shelter to get the abortion, instead forcing her to go to a religiously-affiliated “Crisis Pregnancy Center,” against her will. When challenged by the ACLU, the court recognized both the barbarity and the unconstitutionality of depriving Jane Doe of the right to an abortion. That should have been the end of the story. But the Department of Justice proceeded to file an appeal with the U.S. Supreme Court, urging the justices to vacate that decision and discipline the ACLU attorneys who represented her.

Not only did this represent an extraordinary attempt to intimidate lawyers defending women’s constitutional rights to abortion, but it also upped the ante on the government’s unconstitutional policies in a significant way- policies that seek to prevent women from accessing reproductive care each and every day.

Jane Doe’s case was not an isolated one. The Trump administration has most recently blocked Jane Moe, an unaccompanied immigrant teen in federal custody, from access to a clinic to obtain an abortion using her own private funds.  This attempt marks at least the fourth time in as many months that Trump administration officials have refused to allow young immigrant women in government custody access to abortions.    There are many more Janes out there: young women who are being denied the ability to get reproductive care, coerced and shamed for their decisions, and forced to reveal their pregnancies to others when it’s not safe for them to do so.

Since taking office, the Trump administration has taken proactive and purposeful steps to prevent the advancement of women’s rights and access to reproductive health while rolling back critical protections already in place.

One of President Trump’s first actions as President was signing an Executive Order reinstating and expanding the Global Gag rule, barring US foreign aid from going to any NGO that provides abortion services or even discusses abortion with patients. Interim Department of Health of Human Services regulations would have effectively eviscerated the Affordable Care Act’s contraceptive mandate, prompting a federal court in Pennsylvania to step in recently to prevent “enormous and irreversible” harm to “Pennsylvanian women and across the nation.” Significantly, the court recognized the “insidious effect” of the guidance in furthering gender stereotypes, undermining equality, and intruding enormously into the lives of women.

And these are only a few examples of current attempts by the federal government and states to block access to abortion, including for immigrant women and girls in detention. The U.S. House of Representatives recently passed a bill that would ban abortions after 20 weeks. And Pennsylvania Governor Tom Wolf has vetoed what would have been the most extreme and restrictive abortion bans in the country, passed by the Pennsylvania legislature. Sadly, attacks against women and access to reproductive health may well continue.

Now more than ever, we cannot waver from the fight for women’s equality and immigrants’ rights. Reproductive rights are civil rights. Without them, women would never have made the advances they have made in the workplace and in society. We have fought a long and hard battle to get to where we are, and we are not going to allow intimidation or any other tactics to set us back.