The Hate Group Behind the Sacramento White Supremacist Rally

A coterie of racist skinheads and other white supremacists staged a rally at the state capitol in Sacramento, California, this past weekend, a rally that degenerated into a bloody brawl when the racists were attacked by a larger group of left-wing counter-demonstrators. At least 10 people were reportedly injured.

Both sides came prepared for a fight, after a previous brawl in southern California earlier in the year, and both sides declared “success” after the fracas, but it is the white supremacists who most benefit from the free publicity that such violent generates “We stood our ground. We’ll be back,” promised one white supremacist after the Sacramento event. That was Matthew Heimbach who, with fellow racist Matt Parrott, organized the rally from afar.

Heimbach and Parrott are the leaders of a new hate group, The Traditionalist Worker Party (TWP), which claims to be the “political arm” of their earlier white supremacist endeavor, the Traditionalist Youth Network (TYN), but seems to be supplanting it.

Their rally is part of a greater effort by Heimbach and Parrott to unite different racist groups under their umbrella to promote white nationalism and a white ethno-state. TWP advertised the event as a rally “against globalization and in defense of the right to free expression.” Plans for the rally had been in motion since April and TWP secured a permit to hold the event at the Sacramento State Capitol. 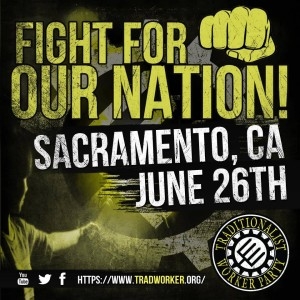 The group also claimed the rally was, in part, a response to anti-racists, minorities and immigrants who protested at events in California held by presidential candidate Donald Trump. TWP organized the demonstration along with the Golden State Skinheads, a racist skinhead group allied with TWP.

TWP was created after a largely unsuccessful effort by Heimbach and Parrott to attract young people to white nationalism through the Traditionalist Youth Network. Unable to recruit many college students to his group, Heimbach turned instead to building alliances with neo-Nazis and racist skinheads. In 2013, he attended a gathering in Kentucky featuring the racist skinhead Aryan Terror Brigade, the neo-Nazi National Socialist Movement and several Ku Klux Klan groups.

Since then, Heimbach has conducted more outreach to racist skinheads and neo-Nazis, particularly established groups like the Golden State Skinheads in California and the Keystone State Skinheads/Keystone United in Pennsylvania.

The Golden State Skinheads (GSS), founded in 2003, is a California-based racist skinhead group with members from throughout the state.  They claim to be “a social club of California white nationalists… banned [sic] together for the survival of our people and our beliefs.”  However, previous versions of their website “about us” page stated that they “oppose multi-culturalism, globalization and Zionism, adding “our ultimate goal is to establish a state owned and inhabited exclusively by the white race where we may peacefully exist and prosper governing ourselves without alien influence.”

GSS has coordinated a number of white power concerts and social events throughout the state, including joining other white supremacist groups such as California Skinheads, Blood and Honor, and American Freedom Party in June 2015, in Bakersfield, for a white power gathering dubbed Camp Comradery 2015 [sic].  Heimbach, already tied to GSS, was a main speaker at the event.

TWP has also been active on the East Coast. In February 2016, TWP co-hosted an event with the Keystone State Skinheads/Keystone United in Harrisburg. Two months later, the TWP’s first official mid-Atlantic chapter meeting, held in Philadelphia brought in some 20 attendees and featured Heimbach and long-time Keystone State Skinhead Steve Smith as speakers.