The Ripple Effect of Interfaith Dialogue 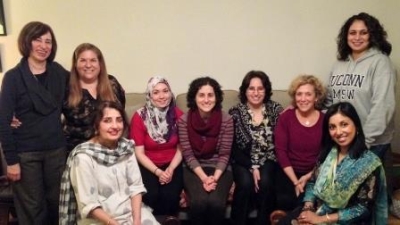 Recent incidents around the world remind us of the power of hate and vitriol to permeate our religious, cultural and national borders. ISIS continues to expand its alliances and fear-mongering tactics. The world is in many ways paralyzed to see a way forward, and the need for solutions capable of building bridges of understanding and respect has never been greater.

In this spirit, in early 2013, the Anti-Defamation League's (ADL) Connecticut Office launched a Jewish-Muslim Community Dialogue program between five Jewish and five Muslim women in the greater New Haven area. The women met for three consecutive dialogue sessions in March, April and May 2013. These sessions were so successful that all ten women requested a continuation of the program into the next year. Over the course of the 2013-2014 academic year, four additional dialogue sessions were held that explored an array of topics related to their own Jewish and Muslim identities and experiences.

Each meeting followed key guiding principles such as active listening, suspending assumptions, and speaking from one’s individual experience. In between the formal sessions, the women teamed up in interfaith pairs to organize and host social, cultural and educational “outreach gatherings.” From hearing about a family member’s experience on the Hajj (Islamic pilgrimage to Mecca), to attending a Shabbat service at a local synagogue, to participating in an Interfaith Passover Seder, the women’s bonds were strengthened and “ripples” of understanding could be felt beyond the group itself.

These ripples can be illustrated in small moments the women have experienced when going about their daily lives.

One Jewish member of the group described an experience she had recently in the restroom of a local department store. As she entered the restroom, she noticed two women, one wearing a hijab, and the other a teenager, sporting ripped jeans and streaks of pink in her hair. A few moments later, the Jewish woman witnessed the teenager aggressively asking the other woman, “Why do you wear those awful things? This is America; don’t you know that?” The Muslim woman was shaking and clearly frightened.  She didn’t speak much English and therefore didn’t respond. Instinctively, the Jewish woman walked over, took the Muslim woman’s hand and gently led her to safety. As they walked out of the restroom. she heard the teenager shout a profanity at both of them. She accompanied the Muslim woman to her family, and with a non-verbal gesture of shared gratitude, they went their own way. No words needed to be exchanged. A quiet understanding of shared humanity. A ripple.

One of the Muslim members of the group said that being part of the group has given her a clearer understanding of the relationship between Judaism and Islam and has inspired within her confidence to share more of herself with Jewish friends and acquaintances. For example, within the last year she accepted an invitation to share some of her insights and experiences with a group of senior citizens at a local Jewish Community Center. Another ripple.

Another Jewish member shared a story about a recent experience she had on a small charter plane to Philadelphia. There couldn’t have been more than 100 people on the plane, and she found herself sitting in front of a screaming child. Everyone seated around her was agitated, hoping the child would calm down. The parents appeared to be Muslim, as the mother also wore a hijab.  The Jewish woman considered what she might do to be helpful.  Then, she remembered a gift that a Muslim member of the dialogue group had given to everyone—Tasbih, Islamic prayer beads that her husband brought back from his pilgrimage to Mecca (known as the Hajj).  She reached into her purse, pulled out the prayer beads and offered them to the small child. The parents were dumbfounded as to what she was doing with them and ecstatic about the joyful calm they brought to their child.

Another Muslim member recounted her experience visiting her home country of Morocco over the summer. In a quiet moment of solitude and reflection, she made her way to a mosque in order to say a prayer of healing for the husband of a Jewish member of the group. An invisible line could be drawn between Islam and Judaism in this moment. A line created by relationships of the heart.

Islamic scholar and charter member of ADL’s Interfaith Coalition on Mosques (ICOM), Ambassador Akbar Ahmed defines dialogue as a way to “rediscover the essential spiritual unity in faith that transcends ideas of group honor and identity.”  It is a simple and yet profound process in which individuals can speak through different lenses about their identity and work towards humanizing the ‘other.’ In the process, relationships are formed – friendships that foster love and not hate.

One of the Muslim participants summarized her experience over the last two years: “I am coming out of the end of the year as a stronger person. The support and understanding of the group has touched other parts of my life. I feel we are building bridges through compassionate understanding. This expands our network to places other than work and home. We are touching on other beliefs than our own only to realize how great the common ground is. The continuation of this work is important because such a group is a pathway to peace. These small steps can be a start to the creation of similar groups creating greater understanding of different religions at a personal level. As was said at the last meeting we still have a lot to learn from each other and in doing so we are coming to a greater understanding of ourselves. I look forward to all that lies ahead!”