2016 saw continued efforts to isolate and demonize Israel, here in the U.S. through campaigns by anti-Israel activists on campus and other venues to problematic rhetoric and resolutions being pushed in international fora. Since the establishment of the State of Israel, ADL has been a strong and outspoken advocate for secure Jewish and democratic state, and 2016 was no different.

ADL CEO Jonathan Greenblatt was busy on this front in his ongoing efforts to promote a strong U.S.-Israel relationship and counteract efforts to delegitimize Israel.

On a recent trip to Jerusalem, he addressed a Knesset caucus on Israel-US relations where he reiterated the importance of a strong relationship between the two countries:

“The ties that binds Israel and America are like a thick rope tightly woven with the fibers of common values — values of democracy — including the rule of law, freedom of religion, an open press, freedom of expression and the dignity of every member of our societies, regardless of their faith, race, gender, national origin, sexual orientation, level of ability or political affiliation.” 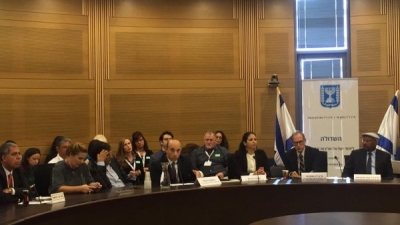 Just at the start of the summer, Greenblatt delivered remarks at the United Nations “Ambassadors Against BDS Summit” and stressed the need to expose and combat the extremists and anti-Semites who are behind the “noxious idea” of the Boycott, Divestment and Sanctions movement against Israel and other efforts to delegitimize Israel:

“Denying only Israel the right to exist and to express Jewish sovereignty and self-determination in its historic home, when all other people either are granted that right de jure or at least their rights are acknowledged de facto – is classic anti-Semitism.”

In his closing remarks, Greenblatt made clear to those in attendance at the U.N. summit that ADL will not sit with those who espouse hatred against the Jewish people. “Anti-Zionism is anti-Semitism,” he said. “Both are unacceptable.”

ADL continued to speak out and express concern over a myriad of issues surrounding the Jewish state this year:

Here’s to hoping that the anti-Israel temperature across the globe will go down in 2017. If it continues to rear its ugly head, you can expect ADL to be out there on the front lines condemning it while setting the record straight.