Skip Navigation
ADL TRACKER
Check out the new ADL TRACKER of Anti-Semitic Incidents
Find Your Local ADL
Anti-Defamation League
In advance of this weekend’s BDS conference at the University of Pennsylvania, we are highlighting five of the most anti-Israel individuals scheduled to speak at the conference. 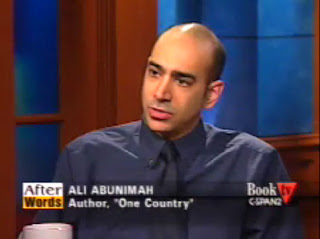 Today we profile Ali Abunimah, the founder and executive director of “Electronic Intifada,” an anti-Israel Web site. Abunimah is scheduled to be the keynote speaker at this weekend’s conference.
In his book “One Country: A Bold Proposal to End the Israeli-Palestinian Impasse” and during various speaking appearances, Abunimah advocates a one-state solution to the Israeli-Palestinian conflict, which would dismantle the Jewish state. He has not hesitated to compare Israel to South African apartheid and Nazi Germany, including describing Gaza as a “ghetto” and a “concentration camp” and arguing that “Zionism is not atonement for the Holocaust, but its continuation in spirit.”
Abunimah also claims that many of Israel’s security-related policies are predicated on racism and not genuine security concerns. For example, in a June 2011 interview on the news channel Russia Today, he claimed that Israel imposes a blockade on Gaza “because they are not Jews” and described it as “fundamentally racist.”
Number 5: J Kehaulani Kauanui
Number 4: Helena Cobban
Number 3: Kristin Szremski
Previous Blog
Rampant Anti-Semitism on …
Next Blog
Saudi Cleric Issues Fatwa…

Anti-Israel Activity & BDS
Anti-Semitism in the US