Skip Navigation
Find Your Local ADL
Anti-Defamation League
Two upcoming left-wing antiwar conferences, one taking place at Pace University in New York next weekend and the second taking place in Stamford, Connecticut the weekend after that, will have a significant Israel angle. These conferences are scheduled to include sessions on a one-state solution, Boycott, Divestment and Sanctions (BDS) campaigns against Israel, opposition to a U.S. or Israel attack against Iran, and more.
The antiwar and anti-Israel movements have long sought to create common cause and unite their objectives. In recent years, many of the larger anti-Israel rallies and gatherings have been co-organized by local and national antiwar organizations like ANSWER. In turn, antiwar events are often marked by anti-Israel slogans and claims that Israel is responsible for pressuring the U.S. into wars in the Middle East.
The following are some details about the planned anti-Israel sessions at the two upcoming conferences:
Left Forum: 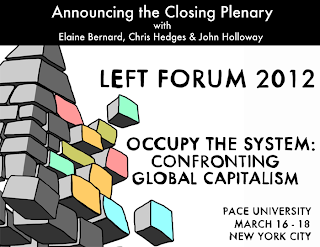 Every year, left-wing activists participate in a major gathering called “Left Forum.” The conference, which in the past has attracted several thousand attendees, is titled “Occupy the System: Confronting Global Capitalism.” It will take place at Pace from March 16-18, 2012.
The conference appears to have an anti-Israel agenda that goes beyond Israel’s alleged role in U.S. foreign policy. It will include sessions on Israeli “pinkwashing” (the claim that Israel showcases its progressive record on LGBT issues to cover up its policies toward Palestinians); a one-state solution to the Israeli-Palestinian conflict; “resisting” a U.S.-Israel war against Iran; Israel as representative of the global 1%; and BDS as a form of “corporate resistance.”
A description for the 1% session, titled “Israel: Strategic Asset to the Global 1%,” reads:
“We will analyze the impact of Zionist strategies in the US including the increased violation and erosion of civil rights, attacks on our movements, and the escalated targeting of Arab, South East Asian, and Muslim communities and communities of color.”
United National Antiwar Coalition (UNAC) Conference:
UNAC, a newly formed coalition comprised of two dozen antiwar groups, will hold its first annual conference in Stamford, Connecticut from March 23-25.
Conference attendees will vote on two major agenda items during the conference, one of which is a proposal on ending U.S. aid to Israel. The conference will also include a session on BDS as tool of “nonviolent resistance” featuring Nancy Kricorian, an activist with CODEPINK, and Ethan Heitner, an anti-Israel cartoonist.
Previous Blog
Dubai Police to Issue Arrest…
Next Blog
Controversial Student Group…

Since 1979, ADL has compiled data on antisemitic incidents, including both criminal and non-criminal acts, occurring across the United States. Here's more on how that process works.
Antisemitism in the US
Hate Crimes
Press Release

ADL issued the following statement in response to the findings of a new Pew Center survey released today that, among other findings, indicates that more than nine out of ten American Jews say there is
Antisemitism in the US
Community Security
tools and strategies

Draw Me Safe: Coloring and Conversation about a Pandemic (ES)

Use Ricardo Morales' "What to Do in a Pandemic... Our Cousins Know" coloring series to be creative and learn how to stay safe and well during the coronavirus pandemic. (Student Resource)
Anti-Bias Education