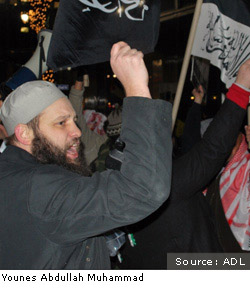 Younes Abdullah Muhammad, co-founder of the fringe extremist Muslim organization Revolution Muslim, pleaded guilty on Thursday for his role in threatening the creators of the cartoon “South Park.”

Muhammad (a.k.a. Jesse Curtis Morton) was arrested by Moroccan authorities in May 2011 after being charged in the U.S. with communicating online threats. His threats targeted Matt Stone and Trey Parker for their satirical depiction of the Prophet Muhammad in an episode of their cartoon. In October he was placed into American custody and brought before a federal judge in Virginia to face charges.
Muhammad helped Zachary Chesser, who was sentenced to 25 years in prison on a similar charge, draft a statement containing language justifying “the death of those who insult Islam or defame its prophet…” The statement was issued on behalf of Revolution Muslim in response to the national attention garnered by Chesser after he threatened the “South Park” creators on a number of online platforms. 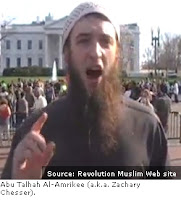 Under Muhammad’s leadership, Revolution Muslim distributed anti-Semitic and pro-terrorist propaganda at its street protests and online, which often included implicit and explicit threats of violence. The group was active mostly in New York until the end of 2010, when Muhammad moved to Morocco. Currently, it operates under the name Islam Policy.
Muhammad, who has a long history of justifying violence against anyone he views as an enemy of Islam, served as Revolution Muslim’s most prolific writer. In addition to his various posts on the group’s website, he contributed to Jihad Recollections, an online English language magazine created by Samir Khan. Khan, who is better known for editing Al Qaeda in the Arabian Peninsula’s (AQAP) English-language magazine, Inspire, was killed by a U.S. drone strike on September 30, 2011, two years after he moved to Yemen to align himself with Al Qaeda.
In the inaugural issue of Jihad Recollections, released in April 2009, Muhammad expressed support for Al Qaeda, writing that the September 11 terrorist attacks “…were, for the most part, positive and the results even better than expected.” He also called on like-minded Muslims to “exploit these results and advance the jihad... It is time to begin to think about the necessary next steps that must predicate the conquering of Rome.”
Previous Blog
Attacker of the Israeli…
Next Blog
Anti-Israel Hostility…

How to Effectively Respond to Bias Incidents in Your Schools

Antisemitism in the US
Extremism, Terrorism & Bigotry
Bigotry
Extremism