Overview: There has been no evidence of antifa or Black Lives Matter organizing or carrying out attacks on suburban or white communities.

Description: Although the large-scale protests following the murder of George Floyd were overwhelmingly peaceful, there was early and abundant disinformation about antifa and Black Lives Matter protesters organizing violent attacks in suburban communities. These rumors emerged on public and private social media channels, in community apps like Nextdoor, in text messages and in physical fliers. Despite the lack of evidence of any such impending attacks, these types of rumors affected communities across the country, often in connection with false reports about busloads of protesters.

On June 2, Fox News posted an article headlined, “Antifa Arrests Coming, Concerns Over Riots Heading to Suburbia, Government Source Says.” The unnamed source was quoted as saying “Local and state authorities have to get a grip on this because if it moves to the suburbs, more people will die.”

Extremist groups fueled many of the rumors, which were picked up on community Facebook pages and text chains. The Twitter account @ANTIFA_US posted a message on May 31 that stated, “tonight we say ‘Fuck The City’ and we move into the residential areas…the white hoods…and we take what’s ours.” Twitter suspended the account, claiming it was connected not to antifa but to the white supremacist group Identity Evropa, but the threatening message had already planted the seeds of fear across the country.

Nationalist Social Club, a small neo-Nazi group based in New England, distributed fliers in multiple states throughout June which claimed that “BLACK LIVES MATTER AND ANTIFA COMMUNIST TERRORISTS ARE COMING TO YOUR COMMUNITY SOON TO WREAK HAVOC AGAINST WHITE PEOPLE!” In addition to stoking fear, the fliers also served as a recruiting ploy for the group by encouraging people to contact them for assistance organizing “defense units” against these alleged violent threats.

NBC News reported on rumors about planned antifa violence in suburban and rural communities across the country, including in Klamath Falls, OR, where approximately 200 people gathered on May 31 to “defend” their town against an antifa threat that never materialized. “Antifa members have threatened our town and said that they're going to burn everything and to kill white people, basically,” claimed a man livestreaming the event on Facebook.

In Locust, NC—a small city in which more than 91% of its approximately 3,300 residents are white—a rumor surfaced, according to New York Times reporting, that police were telling local residents to stay in their homes after receiving a tip that “a black organization is bringing 2 bus loads [sic] of people to walmart [sic] in locust [sic] with intentions on looting and burning down the suburbs…they are now moving out of the cities and going to start terrorizing the suburbs and locust [sic] is on the list.” Although the Locust Police Department refuted these claims in multiple Facebook posts, the original rumor reached nearly ten times more followers than the police department’s efforts to assuage fears, the New York Times reported. 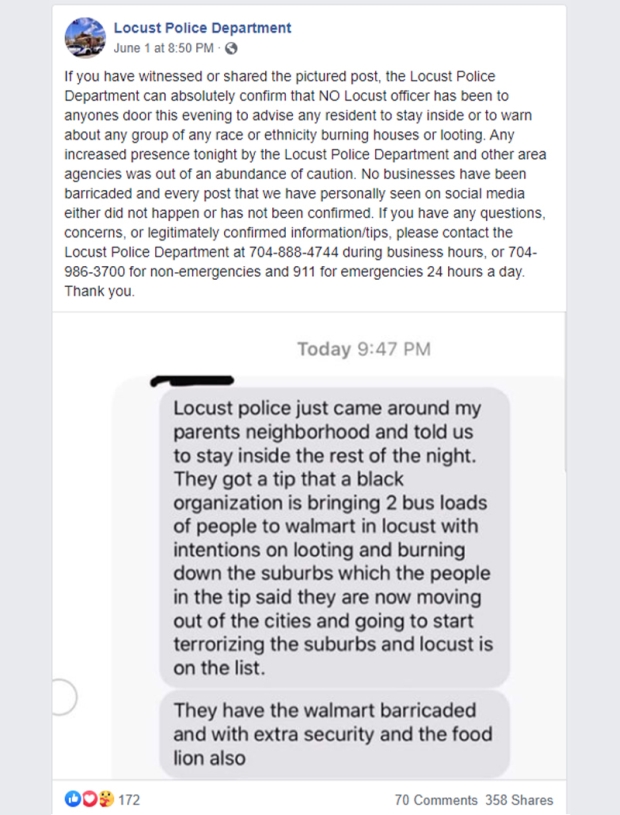