Update: A July 17 report in The Washington Post identified the individual responsible for the “Left Behind USA” Facebook page as Adam Rahuba. The article described Rahuba as a “homegrown troll who uses social media to stoke partisan division” and linked him to numerous online hoaxes in recent years, each intended to antagonize right-wing activists and media. Rahuba self-identifies as a democratic socialist, and says he is “absolutely not” part of any organized antifa group.

Overview: There was no flag burning event at Gettysburg on the 4th of July and no evidence connecting antifa to the rumored event prior to the holiday.

Description: In early June 2020, the Facebook page “Left Behind USA” advertised a “Peaceful Flag Burning to Resist Police Sponsored by Antifa” scheduled for July 4. Rumors about the event—which promised to feature the burning of American, Confederate and Thin Blue Line (pro-law enforcement) flags—quickly spread online. While no antifa event materialized in Gettysburg on the 4th of July, hundreds of counter-protesters, including members of militia groups, gathered at the national park, ready to face off against a nonexistent enemy.

Online reactions prior to the rumored event were heated: On June 22, Proud Boys member Jacob Engels published an article on the Gateway Pundit, a far-right media outlet, claiming that “antifa domestic terrorists are planning to desecrate the Gettysburg National Cemetery and set the American Flag ablaze on Independence Day.” The following day, a post on white supremacist radio host Hal Turner’s website claimed “ANTIFA To Desecrate Gettysburg National Cemetery on July 4 - Then MURDER & BURN White Suburbs under cover of ‘Fireworks.’” In addition to sharing the flag burning disinformation, Turner’s post promoted a related rumor about a supposed law enforcement bulletin detailing antifa’s “plans” to use fireworks during the 4th of July holiday to test law enforcement and communal response, prior to their arson and shooting attacks in white suburbs. The Gettysburg Police Chief denied that this information was issued by the police.

Leading up to the 4th of July, evidence on Facebook indicated that the event was likely a hoax and discussions on Telegram pointed to the role of white supremacists, rather than antifa, in promoting it. The Left Behind USA Facebook page was created only days before the event was posted. According to The Washington Post, “the person managing the Left Behind USA account identified himself as 39-year-old Alan Jeffs,” however, reporters “examined real estate, court and voter records, as well as other public documents, but could find no such person.” The account was subsequently disabled a few weeks later, but not before details of the rumored event had gained traction. On a Telegram channel linked to Vorherrschaft Division, a hardcore white supremacist group, a user posted a flyer for the event and instructed others to “spread this in normie channels” and stated that “spreading it around would make normies mad.” According to Snopes, the Central Pennsylvania Antifa chapter denied any involvement in the rumored event.

Similar rumors about an antifa-sponsored 4th of July Confederate flag burning at Gettysburg also surfaced in 2017. Despite local antifa members’ attempts to refute the rumors beforehand and the lack of any antifa presence at the national park on July 4, hundreds of counter-protesters gathered—reportedly including KKK and anti-government militia group members. 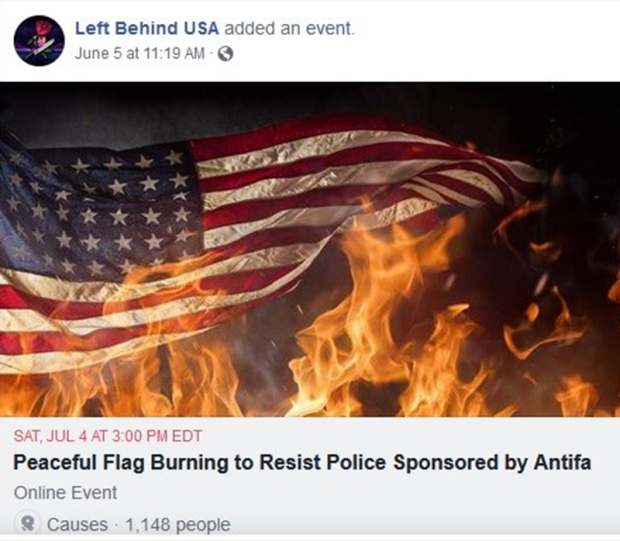 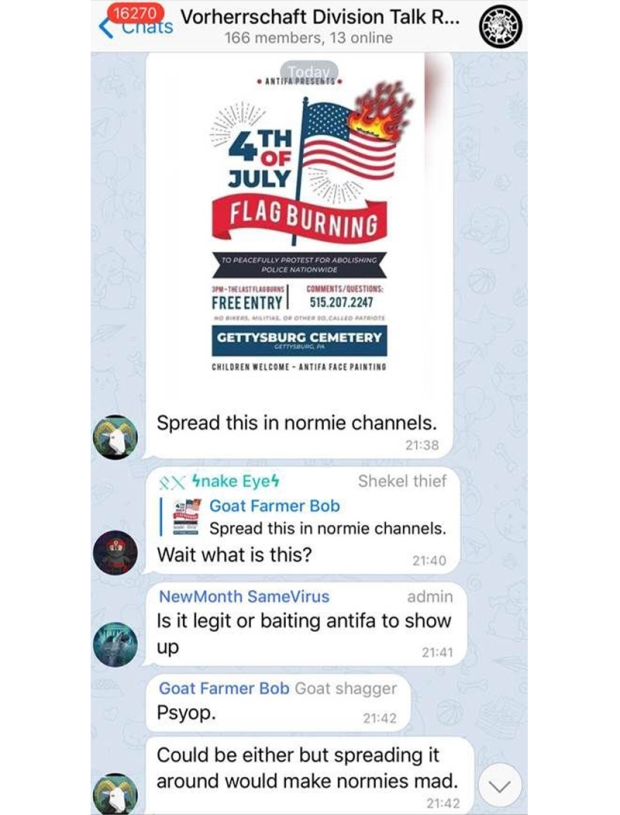